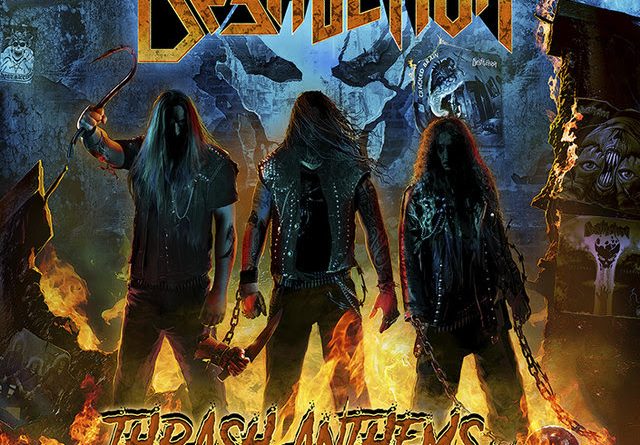 German thrash titans DESTRUCTION unleash their new “best of old school” album »Thrash Anthems II«, today via Nuclear Blast Records. In celebration of the release, the band has released a new track video for of the song ‘United By Hatred’ on YouTube.
The clip includes historical video footage covering over 30 years of the band’s history and features live footage from 1985 till 2016 – a must see for all thrash metal maniacs out there.
Check it out here:

Ottawa nerd-rockers DOUBLE EXPERIENCE announce they will be performing back to back show dates at Indie Week on November 11th in Toronto, ON followed by another crossing of the Atlantic for their sixth UK tour. The tour will be in support of their latest FACTOR-funded single / music video, “The Pilot” off their upcoming fourth album “Rock (Geology)” to follow 2016’s break out “Unsaved Progress”, an album that included their much loved single “The Glimmer Shot”; a Destiny-themed rock anthem, which earned them accolades from the creators of the video game itself plus their cover of Blue Oyster Cult’s ‘Godzilla’.

Watch “The Pilot” below:

DOUBLE EXPERIENCE have performed across 15 countries, playing everywhere from video game museums to tattoo conventions as well as showcases at Canadian Music Week and Indie Week Canada. Their adventures have been supported by international radio, festivals and television alike, culminating with an entire nerd-rock exposé and performance on Global TV in Canada.

New Jersey Crushers CRANELY GARDENS, in partnership with Pure Grain Audio, have released “The Challenger” official video. The track is taken from new album House of Decay and can be viewed below
House of Decay is out now and can be purchased and/or streamed in its entirety at:   https://cranelygardens1.bandcamp.com/album/house-of-decay
Drawing influence from deathcore, metalcore, the new wave of American heavy metal, black, death, thrash and nu-metal, CRANELY GARDENS blends these various ends of the spectrum together to form their particular style. The band consists of Chaz Macklin on vocals, Randy Mac and Joe Fedele on guitar, Alex Niszczak on bass, and Victor Figueroa behind the drums.  The band independently released their debut EP, Locust Valley, in 2015. On August 11 of this year seven-song EP House of Decay was self-released with the assistance of Ghostship Recordings.  House of Decay shows a much darker and more technical effort than the previous EP, and features guest musicians Chad Ruhlig (For the Fallen Dreams), Dan Watson (Enterprise Earth), Sims Cashion, Will Ramos (A Wake in Providence), and Josh Frazier (Narrow Vision).

House of Decay is also available through Spotify, iTunes, and CD Baby.