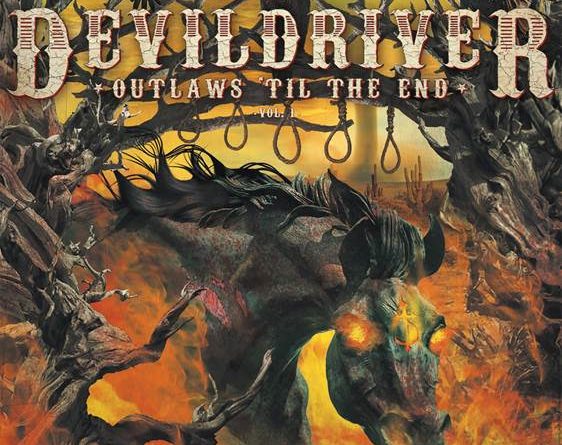 After dropping their potent cover of outlaw classic “Ghost Riders in the Sky”, DEVILDRIVER are following up with yet another track cut from Outlaws ‘Til The End: Vol. 1, entitled “Copperhead Road”, featuring 36 Crazyfists vocalist Brock Lindow. Listen to the song via a brand new lyric video here:

DEVILDRIVER frontman Dez Fafara says, “I have always loved this story of running moonshine and running from the cops, and having Brock on this song was a smart move as his unique voice is absolutely perfect for it. I’m proud to have him on this record!”

Track guest Brock Lindow of 36 Crazyfists adds, “I’m grateful to be included in the barnburner that is Outlaws ‘Til The End: Vol. 1! ‘Copperhead Road’ was always a heavy song with a great story that encompasses all things ‘outlaw’, but DEVILDRIVER ups the ante on this one and puts the pedal to Metal with their vision of the legendary jam. It was a tremendous honor to sing with Dez and the boys on this monster record!”

Monstrous black/doom/punk chimera MANTAR have released the first single off of the band’s new album, »The Modern Art Of Setting Ablaze«, which is set to be unleashed August 24, 2018 via Nuclear Blast.

Stated singer/guitarist Hanno: “We decided to keep the video simple. Setting up, play, destroy. Pretty much exactly what we do all the time anyways. The song itself is a hard-line in your face kinda thing, so we thought just to show the band playing to point out our strengths. As some people claim that we turn into quite ugly animals while performing we also decided to feature this flattering accusation. Enjoy!”

Watch the intense music video for ‘Age Of The Absurd’ here:

MICHAEL ROMEO today unveils his brand new video for Djinn, the second track taken from his forthcoming first solo album, War of the Worlds / Pt. 1. About the song Michael  says ‘”This is one of my favorite riffs on the album. The album title is ‘War of the Worlds’, but in this case, the ‘Worlds’ refers to the worlds of politics and religion.”‘ His eagerly anticipated first official solo album will be released on July 27th through Music Theories Recordings / Mascot Label Group. The wildly ambitious 10-song disc sees the founder, chief songwriter and prime mover of the progressive titans Symphony X furthering his reputation as one of the world’s preeminent axe slingers and composers of adventurous, multi-faceted orchestral metal.

“It’s me putting all the things I love about music in a blender,” says Romeo. “Somebody might listen to it and say, ‘What is this guy thinking?’ But it’s all about being creative and having a good time with it.”

Symphony X fans have been waiting two decades for an honest to goodness Michael Romeo solo album (not counting his 1994 demo recording, The Dark Chapter, which was released in several countries), and the arrival of War of the Worlds / Pt. 1 will be no doubt be cause for celebration. And the guitarist promises a sequel – “Most of Part II is already finished,” he says, “It just needs a few vocals, a couple solos, a few tweaks here and there. I want people to absorb the first one for a while, and then we’ll put out the second record. They’ll complement each other, but they’ll also be a bit different.”