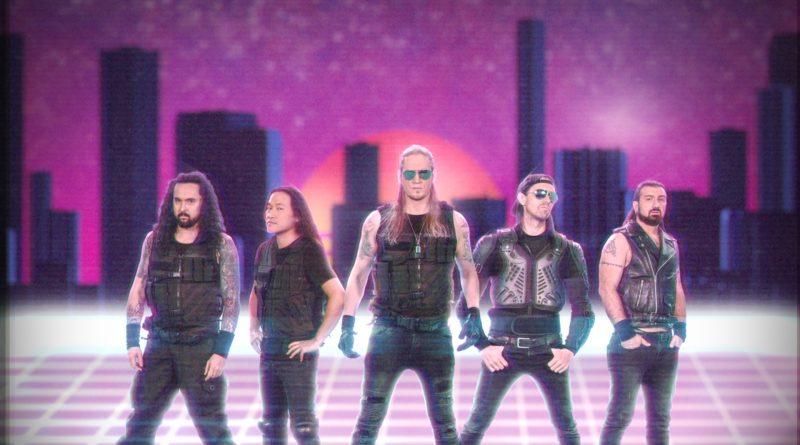 On September 27th, DragonForce will unleash their 8th full-length album, “Extreme Power Metal”, worldwide. Produced in Los Angeles, California by Damien Rainaud at Mix Unlimited, “Extreme Power Metal” was also recorded, in part, on guitarist Herman Li’s livestream channel on Twitch (www.twitch.tv/hermanli) with participation from the fans. For a first preview of the album, a video for the new single, “Highway to Oblivion”, can be viewed below:

“Highway to Oblivion” will also appear today July 30th as a playable level in AUDICA (www.audicagame.com), a virtual reality “rhythm shooter” from Harmonix, the makers of Rock Band and Dance Central. Armed with a pair of rhythm blasters, players will be able to step into a cosmic arena and smash targets to the beat of the song. A standard edit of the song will be available as well as the intensely challenging full-length version. Clocking in at just under 7 minutes, the full-length version of “Highway to Oblivion” on Expert will be the most difficult song on the soundtrack to date. A flawless run with precise accuracy, timing, and form will earn players one of the coveted top spots on AUDICA’s global leaderboards. For a preview of gameplay, follow Harmonix’s Twitter and Facebook pages.

Extreme Power Metal will be available as a CD Digipak, 2LP+DL and digital.

See below to pre-order the album in other territories:
USA: https://metalblade.com/dragonforce/
Japan: http://wardrecords.com/page/special/dragonforce/

Norway’s avantgarde Black Metal pioneers and innovators BORKNAGAR arise at their most spirited and resplendent on their 11th studio album, “True North”, which is going to be out on September 27th, 2019. Today BORKNAGAR release the single “The Fire That Burns” as a first impression from the upcoming album.

Øystein G. Brun comments: “Finally, the very first single from our upcoming album “True North” is unleashed upon the world, entitled “The Fire that Burns”. On the verge of releasing our 11th album, we’re naturally bound to reflect some about our lengthy past, all the music we have created and all the fights we have fought. In the name of music. Still we are here after 25+ years, stand firm on our musical visions and ready to boot up for yet another musical journey – wherever that may lead in this vast and wondrous world. So when deciding the first song to be released, “The Fire That Burns” was an easy pick. Not because the song represents “True North” as a whole, neither because of the song represents some sort of musical peak. “True North” is way too diverse for such a pick and please concept. But rather it was chosen because of the nature of the song. Musically it’s true towards the musical heritage of BORKNAGAR, and last but not least, the song deals with “The Fire That Burns”. Forever. The very spark that makes life a greater probability than death. Enjoy and rock on!”

Listen to “The Fire That Burns” here:

Next to the Digital Download and the LP version (black and colored), “True North” will be available in Europe as limited CD Digipak (+2 additional bonus tracks) in its first pressing run.

The EP is now available via all known download/streaming platforms: http://nblast.de/Oceans-CoverInDarkness

In celebration of the release, the band also put the official music video for the opening track, the cover of ALESSIA CARA‘s ‘Scars To Your Beautiful’ featuring Anna Murphy (CELLAR DARLING) online. Watch the video here:

»Cover Me In Darkness« comes after the band’s widely popular debut EP »Into The Void« (see music videos below) which was released earlier this year when the band signed the record deal with Nuclear Blast, and includes cover versions for songs by ALICE IN CHAINS, RADIOHEAD, DEFTONES and ALESSIA CARA.

The band is currently working on their debut full-length album.

Commented singer Timo Rotten: “Some time ago I saw some girl on Instagram singing Creep by Radiohead with her acoustic guitar. I was devastated. It was so emotional that I totally lost it. So we came up with the idea of doing this whole EP consisting of song-covers with really moving lyrics. Each of us chose one song to put on the EP, so it really represents OCEANS in its entirety. I think it’s the perfect appetizer for our debut album, to say the least. Some moments on this EP really have me at my darkest.“

»Cover Me In Darkness« tracklist:
01. Scars to Your Beatiful (ALESSIA CARA) feat. Anna Murphy
02. My Own Summer (DEFTONES)
03. Creep (RADIOHEAD)
04. Would (ALICE IN CHAINS)