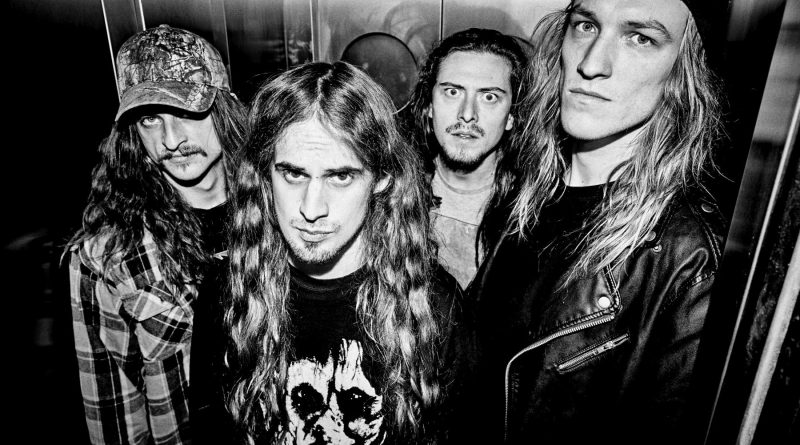 DUST BOLT – New Video For “Another Day In Hell”

The start of 2019 slams: On January 18th DUST BOLT fire a real thrash-bomb with their fourth longplayer “Trapped In Chaos”. Now the raging quartet releases their third single and video off the upcoming record – watch “Another Day In Hell” right now below:

The band on the new single:
“Another Day In Hell is the by far slowest and darkest song on the new album and probably even in DUST BOLT´s history. Originated on an acoustic guitar, Lenny took this song to the rehearsal room one day and it was kind of fitting to how the band and its members were feeling at that point of time. The video was shot on one day, together with Bloodspot frontman and singer Peter Kunz and shows a different side to the band´s personality than most listeners have seen before. For this one we wanted to let the music do the talking and portray the day the song was written from the perspective of every bandmember.”

Trapped In Chaos can be pre-ordered HERE and will be available in the following formats:
– CD Jewelcase
– LP Gatefold BLACK
– LP Gatefold BLUE (Napalm Mailorder exclusive)
– Digital Album
Tracklist:
01. The Fourth Strike
02. Dead Inside
03. The Bad Ad
04. Bloody Rain
05. Rhythm To My Madness
06. Shed My Skin
07. Killing Time
08. Trapped In Chaos
09. Another Day In Hell

“Question Everything” is the new single and video just released  from Swiss melodic metal giants Dreamshade. The band are about embark on a European tour along with Don Broco and Emarosa, they’ll be heading down to South Africa in February for their second nationwide with hardcore heavy hitters Truth and Its Burden.
The song and video are a little different to what you are used to from the band as they explain, “This is a very unusual song for our repertoire. We never made something similar before and we are really excited to share it with our audience. I think they will be quite surprised!”
They go on to add, “Question Everything was inspired by the present situation of the music industry: There are a lot of good artists out there but only some of them will eventually make it and this is not only up to them. Sometimes it’s somebody else who has the power to turn a regular artist into a successful one. Money is at the very core of it. You can find yourself ahead of the curve but be completely forgotten soon after. We really believe that music speaks for itself. To those who listen it doesn’t really matter if a project is backed by an incredible budget or not. Our aim was to describe all of this with a funny and ironic scenario on the video set. We had so much fun! You’ll roll on the floor laughing watching it“

Question Everything is available now on all digital platforms including:

Greek extreme symphonic metallers CAELESTIA just released their official video for the track “Thanatopsis”, from their album with the same name, through David Ellefson’s (MEGADETH) U.S. based EMP Label Group (distributed in Europe via S.P.V. GmbH). The mixing and mastering of the album was completed at the legendary Fredman Studios in Gothenburg (Sweden), by producer Fredrik Nordstrom.

Enjoy the video below: