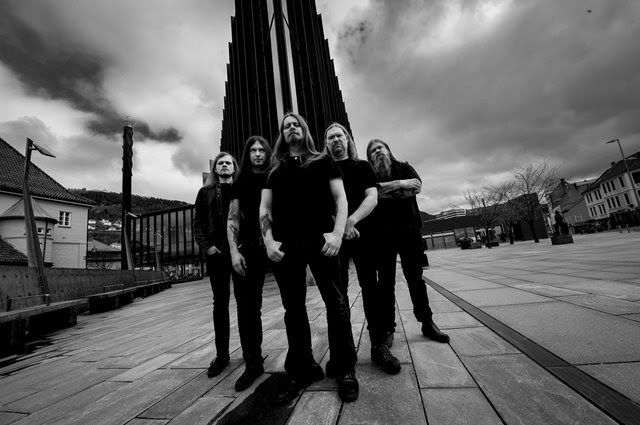 In exactly one week from today, black avantgarde Norwegians ENSLAVED will finally unleash their new album »E« and prove that for a band with more than 25 years of history, they are still reinventing themselves. While the 10-minute-long opening track ‘Storm Son’ gave fans a taster of what to expect from the new album, the single ‘The River’s Mouth’ reveals a heavier and more harsh side of the 14th full-length release. Watch the official video for ‘The River’s Mouth’, which was once again created by Josh Graham (SOUNDGARDEN, NEUROSIS), here:

Songwriter and guitarist Ivar explains: “‘The River’s Mouth’ is a quite heavy track, drawing both on our rock roots and of course the foundation of everything awesome: mid-80s, mid-paced Bathory. It also includes some odd space-rock in the choruses and the end part – finally BATHORY and HAWKWIND met. I like the energy of this song a lot – both Cato and new-kid-on-the-chopping-block Håkon is doing such a great job with the psychedelic parts, the chorus and the ending. What a drive! The end sounds like travelling at insane speed through wormholes. The theme here is your relationship with the “future”, as we describe it: The sensation of time moving along is a construction of our brains – physics claims all time to already have been “rolled out”; try wrapping our brains around that one! So the future would be, speaking in tabloid; a piece of land we just haven’t arrived at yet. But it is already here. The song is about acting in tandem with your future self which already arrived at this “future island” – do not sit and wait, make sure you lay the ground for what is to happen in the future, now!”

The brothers Max and Iggor Cavalera formed the legendarily trailblazing heavy metal band SEPULTURA as teenagers together in 1983. Across six studio albums the Brazilian punishers perfected the art of darkness and extreme music with thrash classics such as Beneath the Remains, Arise and Chaos AD, while exploring the underbelly of third world political issues and broadening the genre’s horizons with an exploration of indigenous culture, culminating with the landmark Roots album in 1996. A decade after Max left SEPULTURA and meanwhile released seven successfull records with SOULFLY, the two brothers got back together in 2006 to form CAVALERA CONSPIRACY: A bold testament to the talent and power these two possess together. An invigorating mixture of speed and aggression, finest thrash power and the fiercest riffage!

It’s time to get ready for one of the most heaviest and hotly anticipated metal records of 2017, when the mighty CAVALERA CONSPIRACY will strike back this Fall: ‘Psychosis‘ will be coming out on November 17th on Napalm Records! Now the Cavalera brothers have unleashed a first lyric video for the album opening track ‘Insane‘, says Max Cavalera: “Let’s open the mosh pit and go insane!!!“

Check out the band’s new video and go insane right below:

Coming as CD digi pack, Digital Download and LP Gatefold editions, ‘Psychosis‘ is now available for pre-order. Get your hands on it at: http://smarturl.it/Psychosis-NPR
Wisconsin bruisers RIG TIME! have released the official video for “Blister,” a track from forthcoming sophomore album War. Video credit goes to Jymi Calkins of Circadian media. Get some!
War is coming October 20 via Innerstrength Records. Pre-order the album below.
https://innerstrengthrecords.bandcamp.com/album/rig-time-war