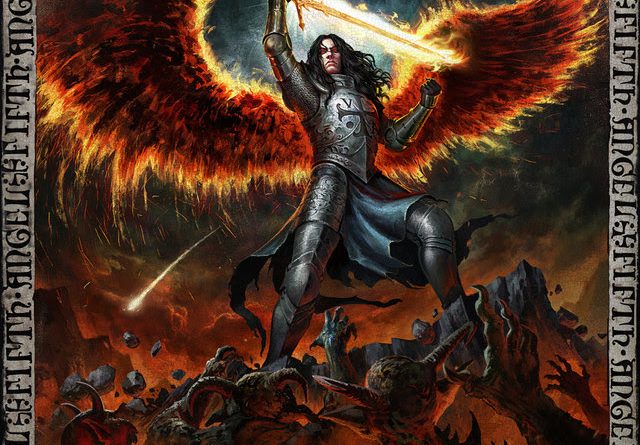 FIFTH ANGEL are back after almost 30 years! Their new record entitled »The Third Secret«, will be released on October 26th through Nuclear Blast Records. Now the band finally presents the first single, ‘Can You Hear Me’, off of their upcoming record in the form of a lyric video. Watch here:

Purchase ‘Can You Hear Me’ now: http://nblast.de/FifthAngelCanYouHearMe

Comments Ken Mary, “This track from the »The Third Secret« album is one of our favorites musically, and is reminiscent of our former power ballads. I feel that Kendall did an amazing job on the vocals, delivering an incredibly emotional performance. The song is a very heartfelt tale about the internal struggle that we all have within our being. Everyday we fight a war between what we should do and sometimes what we do instead of that, and this song highlights that struggle.”

»The Third Secret« can now be pre-ordered in various formats, here:
http://nblast.de/FATheThirdSecret
Pre-order the album digitally to receive ‘Can You Hear Me’ instantly!
Listen to the track in the NB Novelties Playlist: https://open.spotify.com/user/nuclearblastrecords/playlist/6aw9wiedFzzhJiI96DhNhw

Following the first leg of a massive World Tour in North America during April and May, it’s now time kick off the next leg and bring The Shadow Theory overseas! KAMELOT is returning to Europe for their biggest headliner tour to date. Special guests on the tour include Leaves’ Eyes, Visions of Atlantis, Dynazty (Sweden), Circus Maximus (Oslo) vocalist Lauren Hart (Once Human) and more!

Just in time for the upcoming tour, the band has released a brand new music video for the track “MindFall Remedy”! The live footage is taken from KAMELOT’s North American tour and just offers a glimpse of what you can expect when the band takes the stage. Watch it below:

“The North American Tour was our biggest ever and we had to chronicle it in some way, the fans were so amazing. We decided to shoot this video and mix in scenes from the tour. We cannot wait to return to the US and Canada for the next run!“, states KAMELOT‘s Thomas Youngblood.

The meaning of the song and title “MindFall Remedy” sparks some debate, but KAMELOT singer Tommy Kaverik sums it up beautifully:
“In this material world, full of vanity and beautifying filters, it is easy to turn to those things when looking for validation and comfort. We have come to expect external gratification to lift us up, solve our insecurities and give us a meaningful existence. With this song we want to encourage people to look inside themselves for answers. Only then can we fully learn to respect and love ourselves and grow as people. There is a way to unlock your inhibitions, and only you possess the key…”

The Shadow Theory was produced by acclaimed music producer Sascha Paeth and mastered by Jacob Hansen. Guests on the album include Lauren Hart (Once Human), Jennifer Haben (Beyond The Black) and Sascha Paeth. The amazing cover and artwork was created by Stefan Heilemann.

Get your copy HERE!

Commented singer Scott Vogel: “This is TERROR 2018. This is who we are and how we live. This is our definition of Hardcore and the way we see this world for better and for worse.”