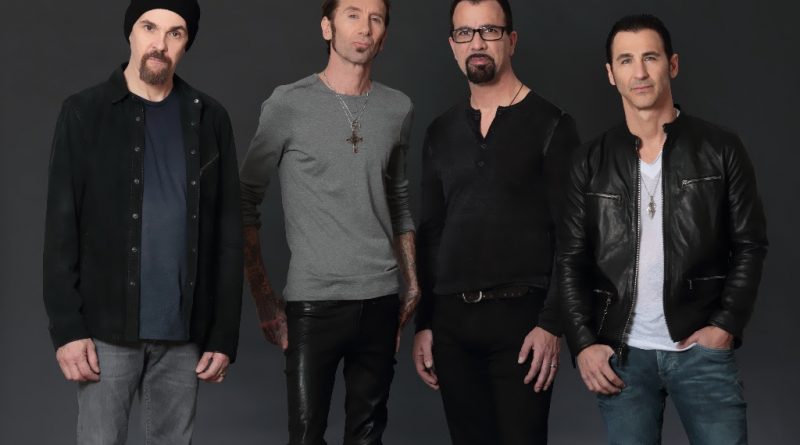 GODSMACK premiered the official music video for “Bulletproof”, the lead single from the multi-platinum US band’s upcoming ‘WHEN LEGENDS RISE’ album due out April 27 via Spinefarm Records. Directed by filmmaker Troy Smith, this satirical clip documents the band’s quest to make a new video.

In the video, GODSMACK’s manager – played by actual manager, Paul Geary– suggests that it’s time for the group to expand their fan-base by working with new (and clueless) video directors, including one played by Sebastian Bach and another by Billy Ray Cyrus. After being pitched a host of highly questionable ideas, vocalist / guitarist Sully Erna decides to hire his cousin, Salvatore Pasquale, from Sicily, Italy.  Everything inevitably goes wrong at the shoot, climaxing with the set catching fire and, ultimately, the destruction of the video files.

Says Erna: “This is very much a short film/music video – I wrote most of it with some contributions from Troy Smith and Kenny Funk. We just really enjoy having fun and laughing. Music is about entertainment just as much as it’s about the art. And we want to share what we do with audiences of all ages. The band discussed having me direct this debut video, so I just ran with that concept and twisted it up. Comedy is nothing more than reality exaggerated, and anyone who doesn’t enjoy a fun video like this is simply taking life much too seriously.”

Salvatore Pasquale declined to comment, except to add:“This script was no good from the beginning. Next time you wanna make something nice, you call Pasquale and he make you the best video ever! Molto Bene! I no need answer no more. Ciao!”

To coincide with the album’s release, GODSMACK will appear at a number of high-profile US festivals before starting an extensive co-headline outdoor amphitheatre run with Shinedown. Headline dates in the UK & Europe are being lined up for the autumn.

20 years since the release of their debut self-titled album and 20 million album sales later, GODSMACK– Sully Erna, Tony Rombola [guitar], Robbie Merrill [bass] and Shannon Larkin [drums] – are a stronger animal than ever. The proof is in the grooves of ‘WHEN LEGENDS RISE’, the band’s seventh studio album and their first in four years.

‘WHEN LEGENDS RISE’ is available for pre-order now here.

AGRESSOR will reissue their acclaimed third full-length, ‘Symposium of Rebirth’ (1994) in its original version, which comes together with a fully re-mastered edition on 2CD and also as gatefold double-vinyl that both contain several bonus tracks. The release date of this collector’s dream come true under the name of ‘Rebirth’ has been scheduled for June 8th, 2018. The French death metal innovators are offering the re-mastered version of the track “Overloaded” as a taste of things to come below:

Greek occult black metallers with ritual & 70’s rock influences, ACHERONTAS, release new single from “Faustian Ethos” album, due out on May 18th in Europeand May 25th in North America via Agonia Records. Listen to “The Old Tree And The Wise Man” below: