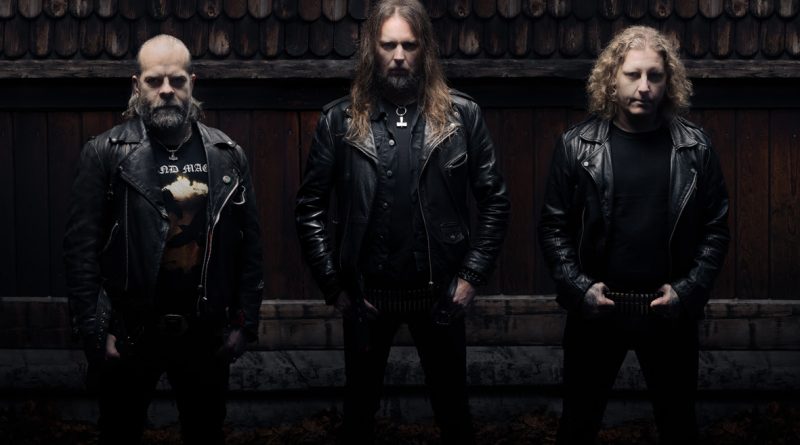 The band states;
“Dear headbangers, Grand Magus has returned and we bring you the awesome power of the Wolf God!”

Pre-order »Wolf God« now digitally and receive the title track instantly (on Amazon and iTunes) or stream the song on all streaming plattforms: http://nblast.de/GrandMagusWolfGod

»Wolf God« rises over the Heavy Metal scene majestically and lets the guitar riffs speak for themselves. The groove and heaviness that were featured on the successful predecessor can also be found on the new, ninth studio album which once again holds a number of future classics.

Recorded in Sweetspot Studio in Sweden, together with producer Staffan Karlsson (ARCH ENEMY,FIREWIND, SPIRITUAL BEGGARS), the corner stone was laid for another triumphal procession. As the majority of the songs were recorded on the first take, they have an honest, diverse and yet down-to-earth sound that envelops the trio’s true power.

The track is off of the band’s new album Extinctions, which was released this past November via Century Media Records.

The band recently wrapped a co-headline Canadian tour with Darkest Hour and opening special guests The Agony Scene. Unearth is gearing up to tour the U.S. for a handful of West Coast dates supporting Soulfly starting in Spokane on February 22nd and ending in Los Angeles on February 26th. Following their U.S. dates, Unearth will hit the road again with Darkest Hour for another co-headline tour, this time in Europe. For more information and to purchase tickets to the band’s upcoming shows, visit their Facebook page HERE.

After an awe-inspiring 20 years of blazing trails and dominating stages, UNEARTH is now institutionalized as a relentless force in heavy metal, standing the test of time with consistently triumphant creative output, tireless road warrior resilience, Blue Collar style workmanship and a resolute determination to deliver the goods.

“It’s a sad song. We wanted to describe musically how our perception of death changes as technology and science make progress. I was lyrically inspired by Kübler-Ross’s the five stages of grief. At first, we can’t accept the death of loved ones, but the time surely comes when we have to accept it.” – Ryo