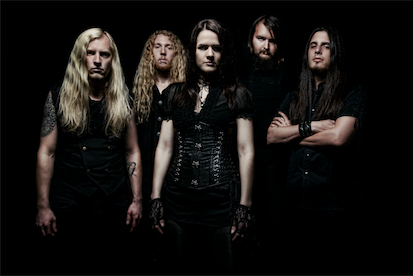 The Sacramento-based quintet GRAVESHADOW – who deftly mix symphonic/gothic metal with elements of doom, thrash and epic progressive power metal – have released a riveting new track from their forthcoming M-Theory Audio debut, Ambition’s Price, due out April 13. The song “Doorway To Heaven” can be heard below:

“Doorway To Heaven” – which is also now available digitally for stream or download at iTunes, Spotify, Bandcamp and other platforms – marks the second advance taste of Ambition’s Price. Last month, the group released a lyric video for the new song “Widow and the Raven,” which can be seen at this location – https://youtu.be/sjGsEINzJys  A music video for a third song was filmed last week and will premiere closer to the album’s release.
GRAVESHADOW will perform the new songs live next month when they hit the road for a string of West Coast dates with the Norwegian gothic metal act Sirenia and Canada’s Threat Signal. The group, who just played a successful show in their native Sacramento alongside Iced Earth, has also announced a hometown acoustic performance at Dimple Records (Arden Way location) on Record Store Day, April 21. A local record-release show will take place later that night at The Boardwalk.
Ambition’s Price is available now for pre-order via the M-Theory Audio webshop (www.m-theoryaudio.com/store). The stunning and detailed cover art was created by Serbian fantasy graphic designer Dusan Markovic (Jag Panzer, Seven Kingdoms, Mystic Prophecy), while the album was produced and mixed by Armand John Anthony (Night Demon, The Fucking Wrath, Gygax), and mastered by Colin Davis at Imperial Mastering (Deeds of Flesh, Decrepit Birth, Origin).

BLACK SALVATION – featuring Uno Bruniusson formerly of In Solitude and Grave Pleasures and currently of Death Alley – challenges the listener to open wide the doors of perception and slowly drift away amongst their transcendental compositions and deeply hypnotic tales of magic and mysticism. Across eight tracks and over forty minutes, BLACK SALVATION exquisitely blends hard rock, doom, and psychedelia into an intoxicating synthesis of rock ‘n’ roll alchemy.

BLACK SALVATION’s Uncertainty Is Bliss is due out April 6th on CD, LP, and digital formats via Relapse Records. Physical packages are available via Relapse.com HERE. The digital edition can be purchased at THIS LOCATION.

THY CATAFALQUE are premiering the second amazing song taken from their forthcoming new masterpiece, ‘Geometria’. The album is scheduled for release on May 4th, 2018.  The Hungarian multi-instrumentalist is now streaming “Sárember” below:

Mastermind Tamás Kátai states: “This is a song about soil on more than one level and symbolically deals with the duality of matter and other dimensions. Stars in my eyes, mud on my heart. The title translates as ‘Mud Man’ and it features Gyula Vasvári from Perihelion on vocals and Misha Doumnov on violin.”

The artwork of ‘Geometria’, which has been created by Tamás Kátai himself, can be viewed in the video.