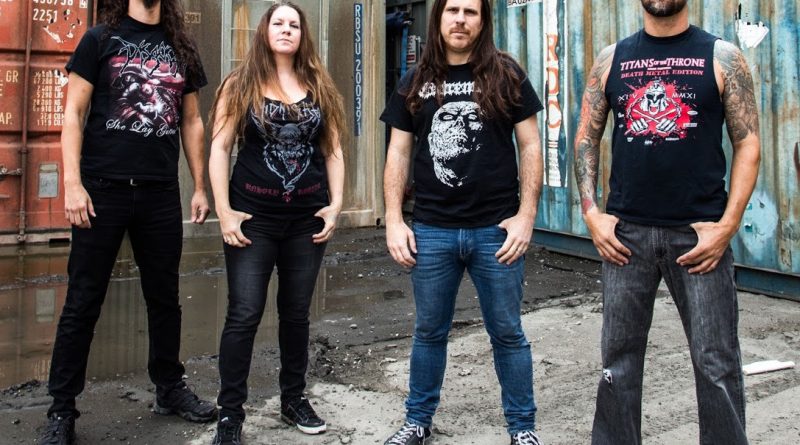 “‘Fatal Illusions’ is a track that was truly co-written by Dan, Gus and myself musically and it was a lot of fun to arrange everyone’s riffs while we put the song together. One of the coolest things about this new record, for me personally, is that the writing has become more and more of a team effort, which is invigorating and keeps things interesting for us. When looking at Spiritual Healing for inspiration, one of the more depressing realizations that I came to as far as the lyrics, was that many of the topics that DEATH were addressing back in 1990 are still major issues today. As everyone knows, mass shootings have reached epidemic proportions in this country and we felt that it was a very ‘death metal’ appropriate topic to tackle. This tune is more about the delusions that lead someone to commit this kind of violence; the mindset that would make someone take such a drastic and tragic course of action. Before anyone starts projecting their own politics on the song, this is not an anti or pro gun song. This is an anti-mass shooting song. And if you think that there’s anything controversial about that, you can fuck right off.”

GRUESOME’s second studio album Twisted Prayers is due out June 1st on CD/LP/DLX LP/CS/Digital via Relapse Records. Physical packages are available via Relapse.com HERE and Digital Downloads / Streaming Services AT THIS LOCATION. Deluxe LP edition of the album includes an accompanying Flexi Disc featuring companion artwork and a cover of POSSESSED’s “The Exorcist”.

Amazing’ is the opener track for the upcoming WOLFEN RELOADED album “Changing Time” coming out on June 22nd via Volcano Records. The band has just released a lyric video for this solid and powerful tune on their Youtube channel. Watch it below:

German hard rock act WOLFEN RELOADED is waiting for a great coming back to the scenes, with an album just preannounced as a mix of both modern and classic rock influenced by Queensryche, King`s X, Dokken and Van Halen. The band, that joined the stage with Operation: Mindcrime, Thunder and Bonfire during the years, will headline a great rock show at Rockhause Club in Salzburg on June 16th  for the release party of Promised Land, but other news are still to be announced before the release.

Featuring 10 fist pounding tracks rooted in traditional heavy metal melded with the symphonic beauty of power metal, SONIC PROPHECY capture the excitement and sound of such bands as Iron Maiden, Judas Priest, Helloween, Hammerfall and Kamelot while blending other musical styles to arrive at a sound all their own.

“Savage Gods” follows SONIC PROPHECY‘s 2015 sophomore release “Apocalyptic Promenade”, an album that combined the melody and beauty of symphonic power metal while maintaining the crunch, drive and power of traditional metal plus their 2011 debut “A Divine Act of War”, which had its music placed in the television series “Rock n’ Lock”, the video game “Volgarr the Viking” and movie Danny Trejo’s “Vengeance”.

“Savage Gods” will give fans an adventurous listening experience. It’s an album that combines melodic hard rock, driving heavy metal, and chest pounding anthems in a way that is uniquely Sonic Prophecy.

“This is pure heavy metal with driving guitars, thundering drums, and some of what I feel is my best vocal work to date. With songs “Night Terror, “Unholy Blood” and the album title track, we’ve really laid down a brutal sonic backdrop, along with keeping the melody, which is important to our music.” comments vocalist Shane Provstgaard