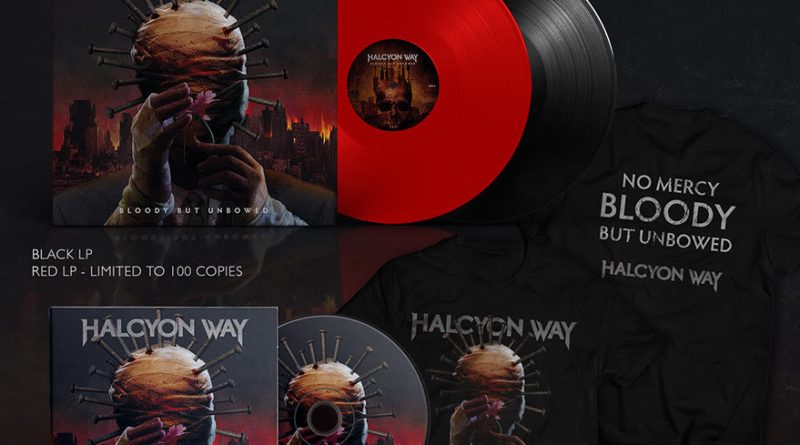 HALCYON WAY, the American metal band from Atlanta, premiere the first single from their upcoming studio album “Bloody But Unbowed”, due out on August 3rdon Agonia Records. The new song, titled “Blame”, is available in the form of a music video directed by Chance White and produced by White Flame Studios. Watch the video below:

HALCYON WAY‘s sound cannot be neatly slotted into any sub-category of metal. It can be described as heavy, catchy, technical, progressive and above all, focused on strong songcraft. From Megadeth to Dream Theater, to Testament and Chimaira – HALCYON WAY draws influences & inspiration from many metal bands. With a magnitude of catchy hooks, vocal harmonies a la King’s X or Stryper, and heavy, technical, yet ultimately accessible instrumentation, “Bloody But Unbowed” is sure to please fans of many forms of metal. Be that modern, power, thrash and progressive metal – but also hard rock fans. Crammed full of huge anthemic choruses, shredding solos, and brutal riffs, this release checks off all the boxes.

“Bloody But Unbowed” was recorded, mixed and mastered by Mark Lewis(Whitechapel, Trivium, Bad Wolves, Threat Signal) and is replete with artwork from Travis Smith (Opeth, Overkill, Death, Iced Earth). The album boasts a very special appearance of “The Nailhead Choir”, with many guest names to be revealed soon.

The band commented: ““We are beyond excited to finally unleash this beast upon everyone. This is by far our heaviest album, but it also has the biggest choruses, and it’s just the right next step in our evolution as a band. It was a difficult album to write and put over the finish line, and we cannot wait to have everyone hear it. From the songs to the production to the art, we think all our fans are going to absolutely love it, and when people that haven’t heard Halcyon Way before get a taste, they’re going to be like ‘where has this band been my whole life?'”.

Old friends pass through our lives similar to characters in a time-worn, dog-eared novel.  As we page through life, they return to walk alongside of us on bold new adventures at all the right moments. Such is the story of The Magpie Salute. For as much as the group represents a musical union of swaggering rock ‘n’ roll, psychedelic blues, and campfire-worthy storytelling, it also marks a reunion of musicians whose paths twisted and turned right back to each other.

Pulled together by guitarist Rich Robinson, it continued a storyline he began in the Black Crowes with guitarist Marc Ford and bassist Sven Pipien. Meanwhile, vocalist John Hogg shared Hookah Brown with Robinson as keyboardist Matt Slocum and drummer Joe Magistro both joined him for solo records and tours over the years.

The Magpie Salute are announcing High Water I with the first single “Send Me An Omen.” that you can listen below.  The twang of a hummable riff roars under Hogg’s towering delivery before spiraling into an entrancing melody punctuated by gang harmonies and butter smooth solos.

Talking about the song Rich Robinson says; “Send me an Omen to me wraps up all of the elements of this band. There’s pure rock n roll juxtaposed with these pop melodies sung with a melancholy that creates this beautiful balance of surreal dark and light”

NOTHING return with their third installment, Dance On The Blacktop. The next chapter of NOTHING’s story pulls from all corners of life in its contents. Stories of self loathing, self destruction, and a general disdain for humanity and its, “insignificant” role in Domenic Palermo’s vision of the universe are met with his poised amusement and tranquil hysteria being one himself. All of this told through the eyes of a recently diagnosed Palermo suggesting he is dealing with the early stages of CTE (Chronic Traumatic Encephalopathy), a neurodegenerative disease found in people with serious head injuries. And as they packed themselves in a coffin-sized NYC apartment for 23 days to demo songs it became clear that the ripple effect left upon his psyche from dealing with these newfound symptoms would leave its mark on the material.

NOTHING sought out celebrated producer John Agnello (Dinosaur Jr, Breeders, Sonic Youth, Kurt Vile) to help accentuate the band’s love for all sounds 90s, from rock to shoegaze to pop realms and on both sides of the pond. The next month was spent tracking at the historical Dreamland Studios in Woodstock, NY with newly appointed bassist Aaron Heard. As days moved by, Palermo spewed songs of heightened confusion, anxiety, paranoia, depression, and chronic battles with physical pain- a result of his unstable past and more recent illness. These themes, spoken in a lush angelic language are juxtaposed against the band’s now signature apocalyptic, reverberating wall of shimmering sound, all captured beautifully by Agnello and the open room.

Palermo on “Zero Day”: “The amount of difficulty a person faces when attempting to close the door on all sense, meaning, or value when thinking on our existence is hard to put in words, but to me it has always been the latter. I’ve laid awake countless nights contemplating human life, its hostile uselessness, and why I’m one of the few who choose to see it that way yet manage to move onward. So I suppose in that sense Zero Day is a song of paradoxical enlightenment”