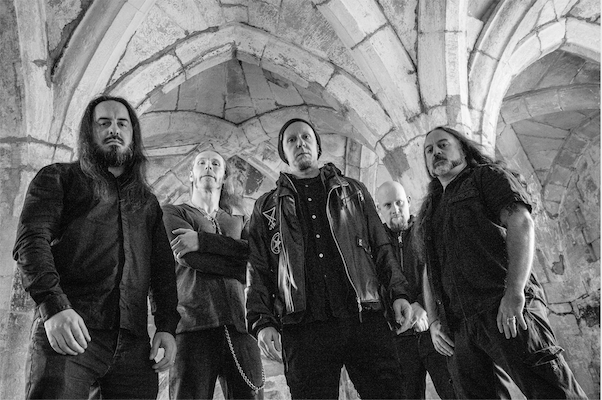 February 13, 2019 – Los Angeles, CA – With “Embrace Of The Godless Aeon,” their first record in five years, proving to be one of the best-reviewed extreme metal releases of the year to date, the UK-based symphonic blackened death metal group HECATE ENTHRONED have unveiled a lyric video for the album track “Erebus and Terror,” which features guest vocals by Sarah Jezebel Deva (Cradle of Filth, Therion, Mortiis).  Watch it here:

While “Embrace…” proves definitively that HECATE ENTHRONED is still as brutal and scornful as ever, the album also shows occasional hints of gothic and ambient influences, and “Erebus and Terror” is a prime example. Says bassist Dylan Hughes, “On an album full of epic tracks, ‘Erebus and Terror’ still stands out as a monster. Massive and powerful, it creeps between eerie dark chills and huge powerhouse sections that utilize the full armory of soaring orchestras and crushing guitars to deliver a skillfully-crafted song. With the incredible vocal talents of Sarah Jezebel Deva, this track is lifted to another level of emotion and feeling, as she delivered a performance that matches the intensity of the music. To have Sarah with us gives our music and writing another dimension – a real organic element that can lift or carry a song through the emotion ranges.”
Adds vocalist Joe Stamps, “’Erebus and Terrror’ is about the ill-fated Franklin Expedition, in which the sailors who were stranded in the Northwest Passage were reported to have begun to cannibalize one another. The lyrics describe a loss of humanity through sickness and desperation and even compares these to lycanthropy – men becoming beasts.”
“Embrace Of The Godless Aeon” – which features cover artwork by Nestor Avalos (Bloodbath, Rotting Christ, The Black Dahlia Murder), as seen above – is out now on CD, digital and red splatter vinyl. A limited-edition deluxe box set that features exclusive purple vinyl and cassette editions of the album, a signed photo card, stickers, patches and other collectibles is also available exclusively direct from M-Theory’s webstore www.m-theoryadio.com/store.

Looking on KETZER‘s musical history, change is what has always defined their sound. From thrashing riffs to atmospheric blackened tunes, KETZER is a band that has always aimed to defy genres. So what can we expect on ‘Cloud Collider‘? Nothing more than a ride on a storm cloud, followed by a soft breeze in your face and, finally, a cleansing rainfall. KETZER‘s fourth effort will surprise many as a shift into yet another direction, combining many of the bands essential trademarks and carrying them one step further: Raging drum beats, harsh and powerfully thrashing riffs, as well as epic melodies that will haunt you long after the last tone has faded away. After years of intense work, KETZER have created an album that can only be described as a milestone in their career and a clean break from all expectations: This album is a storm.

For three years now KETZER has been working on something new, and the result is something new indeed: Somehow linking all trademarks essential to the sound of KETZER, now and then, but taking it all one big step further, these new tunes might well be the strongest KETZER songs to date. Recorded at Markus Stock’s infamous ‘Klangschmiede Studio E’ as well as Laurent Teubls ‘Sculpt Sound Studios’ in autumn 2018, the suitable visual expression for this new effort has been found by cover artist Adam Burke and illustrator Johannes Stahl.

KETZER checked in with the following comment about ‘Cloud Collider‘: “Lately, we have been possessed by storms. First there is a breeze, then the sky darkens: A sense of electric energy starts to fill the air. A sense of sheer power, building up, waiting to erupt. ‘Cloud Collider’ will strike you like a force of nature. When recording an album after months of hard work, blood and sweat, it is always our greatest wish, accompanied by the most terrifying fears, that the recordings will be able to “catch” the songs and their certain, special spark. When we hear the final result for the first time, we have to think: “THIS is how the next chapter must sound”. Only then, we can be satisfied. With all the more pride and joy we can now say about ‘Cloud Collider’, that both is the case, and it is without a single doubt! THIS is how KETZER has to sound in 2019! It is new and it is old and it is everything. It is fast and it is slow and we just can’t wait to bring these songs to the stage. This album is a piece of work that we feel embodies all aspects that stand and stood for the sound of KETZER now and then. An album that manages to still go one step further to form something new!”

The album’s first single ‘No Stories Left’ comes with a special guest appearance by the legendary Proscriptor McGovern of Absu fame, who not only lent his striking voice to the track, but also added the following comment: “It is with inordinate honor to announce my co-vocalist appearance on ‘No Stories Left’: the first single to be issued on KETZER’s upcoming album ‘Cloud Collider’. What I contemplate = I uproariously touch with voice. What I enter into imagination = I make myself one with; however, a tower can fall twice.”

For a preview of the album, the first single, ‘No Stories Left’, can be heard below:

You can pre-order ‘Cloud Collider‘ in the following formats in metalblade.com/ketzer: 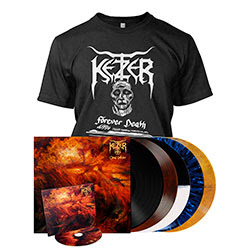 One-man instrumental black metal project 10:13 have released the official video for “Misanthropic Delirium,” a track from recently released debut album Result of an Iron Age.
“Misanthropic Delirium” (official video)
10:13 released Result of an Iron Age on January 24. The album can be purchased and/or streamed in its entirety at 1013.bandcamp.com/album/result-of-an-iron-age
From the mind of multi-instrumentalist/composer Neil Carter, Result of an Iron Ageis a bleak, futuristic soundtrack to humanity’s descent into a hellish, post-apocalyptic world. Indeed, the album’s 11 tracks form a cohesive whole, a musical journey that transcends the common constructs of depressive black metal by seamlessly incorporating progressive elements, not the least of which includes rhythmic complexity, obsidian keyboard layering, penetrating samples, and even the periodic use harmonica to create an immersive experience that twists, churns, and chills to the bone.