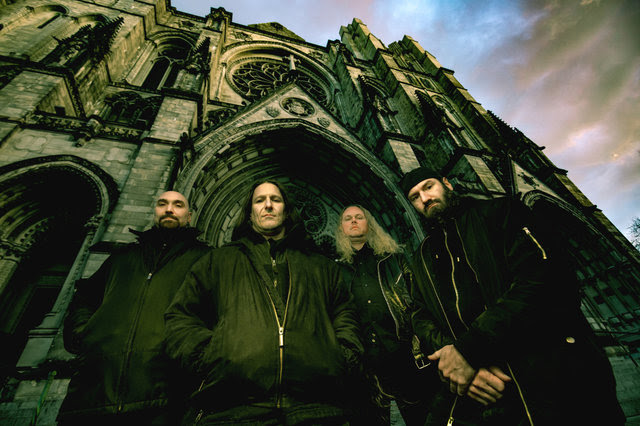 IMMOLATION is a name long synonymous with the extreme music scene, delivering some of the most unique and creatively dark death metal the underground has witnessed over the past 30 years. With the release of »Atonement« last year, IMMOLATION proved once again that they are one band that does not look back, continuing to push the limits and remaining a vibrant force for the future of a genre they helped define.

Today, the New York death metal giants have released a music video for the track ‘When The Jackals Come’. Taken from the critically acclaimed release »Atonement«, the clip was directed by none other than the band’s very own guitarist, Robert Vigna. Watch the clip here:

Commented the band:
“We are excited to release this new video to the fans! This is one of our favorite songs off the »Atonement« record. The song itself has a very dark vibe, so we aimed to make the video as best a representation of it as we could. We hope everyone enjoys it! ‘Their war is already won … your world will end, when the jackals come.'”

For a preview of Unburied, a lyric video featuring hand-painted art (created by by Septian Devenom) for the track “Gore Hungry Maniac” can be viewed below:

Front-man Chris Barnes comments: “I feel ‘Unburied‘ is something special and interesting to release, that is different, being that this is our first digital-only release and the songs are all in their rawest and earliest form. It was also a shame for the songs to just sit there and go to waste – I knew the fans would dig them, and also everyone involved worked so hard writing and putting them together. I always felt like the tracks were excellent Six Feet Under material, and wanted to finish and release them at the time of each release – but there was just so much material that was put together for the ‘Undead‘ and ‘Unborn‘ sessions, that eight songs were basically left over in the demo stages. Also one song from the ‘Torment‘ session that Jeff Hughell wrote – ‘As the Dying Scream’ – was left over in its demo stage as well. Hopefully you enjoy these tracks and it holds you over ‘til the next full-length album!”

Finnish Folk Metal Superstars KORPIKLAANI are set to release their new studio album »Kulkija« (“Wanderer”), on September 7th, 2018 via Nuclear Blast. Today, the band have unveiled the second single, ‘Harmaja’, in the form of a thought-provoking music video. Watch the clip, directed by Ville Lipiäinen (NIGHTWISH, BEAST IN BLACK, POWERWOLF), over below:

Says Jonne, “‘Harmaja’ is an unusual KORPIKLAANI song with its slow tempo and emotional strength. The song is about longing and I managed to charge it with a great emotional atmosphere. When making the album we mostly used the first takes; we didn’t get stuck in details when there was no particular need to. It was important for us to keep the emotion and mood at the forefront even if the technical side wasn’t absolutely perfect at times.

I was surprised – although in a positive sense – that Nuclear Blast wanted to release ‘Harmaja’ as a single and a video. Usually they prefer more uptempo, fun drinking songs. The new album ‘Kulkija’ of course has that material too since being over an hour long it contains the entire scope of different emotions.

I bought a new classical guitar and started to reacquaint myself with the 5-finger picking technique. I created a finger exercise that then formed the basis of the song. The exercise started to sound more and more like an actual piece of music and suddenly a melody came out of that. I sent a very basic version of the song to our lyricist Tuomas Keskimäki who, in the same evening, sent back the lyrics for ‘Harmaja’. The text refers to ‘Sylvian Joululaulu’, a well known poem about longing by Zachris Topelius. I sang the demo in my home studio immediately and that was it – the song felt good and strong right away and I knew that it was going to end up on the album.

The video was shot in the pool of the Maritime Safety Training Centre in Lohja. The water was so cold that even constant visits to the sauna couldn’t stop the coldness from creeping into my bones. It was very difficult to remember the lyrics, keep my head above the surface of the water and sing – while at the same time trying to look like I wasn’t freezing to death. All for art!

We managed to create a nice contrast in the video with the angel. Director Ville Lipiäinen found her accidentally while grocery shopping. I don’t know if he stumbled on her wings or what, but the angel also flew to the same pool in Lohja. The story is about a man missing his dead wife who then returns from the afterlife for one last goodbye, so that the poor man can go on with his life. He manages to drag himself out of the stormy waters back to dry land. Lipiäinen knew exactly what was needed for the video and managed to create just the right atmosphere. The shots change slowly, there is no rush with anything and the story stays just right above the surface until the more stormy ending.”

Tuomas adds: “An expensive repair was done for my long lost friend, a Collin-Mézin violin from 1896, giving it a new lease of life. It was used for the first time in ten years for this album and its sound exceeded all expectations. Harmaja is a good example of it. What you hear is basicly the best of two run through takes combined.”

About ‘Harmaja’ (“The Grey”):
The blackcap (Sylvia atricapilla), the bird in the song, has been unable to migrate south because of a broken wing. The song depicts anxiety and the fading memory. A Finnish poet Zachris Topelius wrote in 1853 a poem titled ‘Sylvian joululaulu’ about homesickness which is referred to by ‘laulu kaipauksen’ (a song of yearning) in the song. The song can also mean the “greyness” when a partner of an old couple dies.