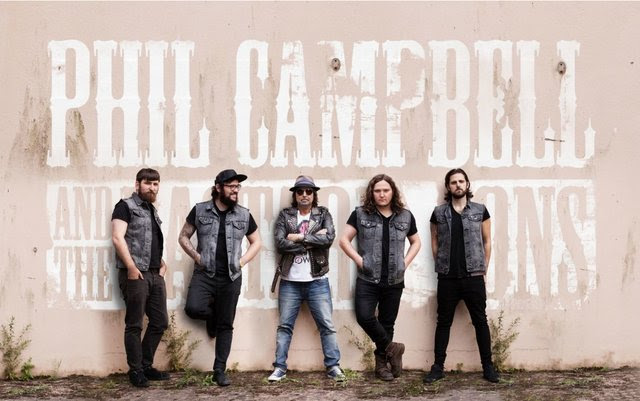 PHIL CAMPBELL AND THE BASTARD SONS, led by the legendary long time MOTÖRHEAD guitarist, have released the first single off their upcoming debut album, »The Age Of Absurdity«. Check out the official lyric video for ‘Ringleader’ below:

The album is now available for pre-order in various formats (CD, CD + tote bag and signed photo card as well as on black, white/red bi colored and clear vinyl – see images of all products below) at this location: http://nblast.de/PCATBSAgeOfAbsurdityNB

‘Ringleader’ can now be purchased as an instant grat track or streamed here:
http://nblast.de/PCATBSRingleader

Venezuelan Gothic Vampire Metal act INFESTUS presents a lyric video from their EP “Dresses Of Darkness” released by Club Inferno Ent. It’s for the song “My Mournful Charlotte”. View it below:

f you like MOONSPELL, TIAMAT and THEATRES DES VAMPIRES this is your blood

STORMHOLD has released a new video for the song “We March” that you can see below. That song is on the new album “Salvation”, which will be released December 8th, 2017 via PURE STEEL PUBLISHING. The pre-order starts on 24th November 2017 in our webshop.

Be ready for attack! The new album from the swedish band STORMHOLD is coming!

After a great tour GRAVE DIGGER and some shows with HAMMERFALL and BULLET, finally STORMHOLD finished their second album “Salvation”. Recorded in the Hoborec-Studio in Husqvarna the new strike is more heavy than ever before and mighty choirs suppot the vocalist Filip Peterson.

Strong melodies, voluminous vocals and the twin guitars are the trademarks which make Metal fans happy since the first days of IRON MAIDEN. The epic “Gods crusade”, the fast “We march” the singalong “We’ll never fall” and the instrumental “Exile” bring back these days to you….enjoy!