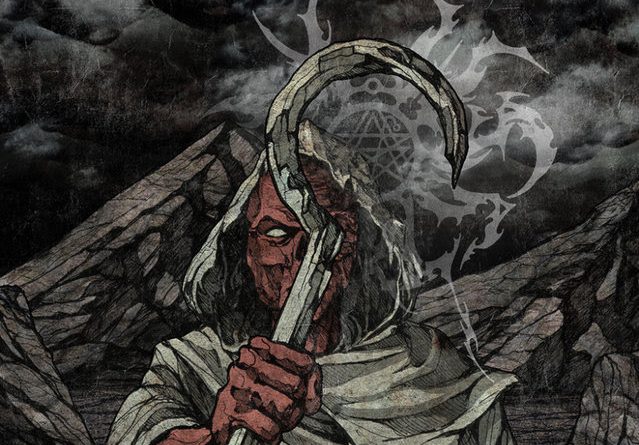 Montréal based melodic death metallers KATAKLYSM will kick off the European leg of the Death… Is Just The Beginning tour with label-mates HYPOCRISY and THE SPIRIT this Thursday!. Today, the band offer a new music video for “…And Then I Saw Blood” in celebration of the upcoming trek.

KATAKLYSM explored a new creative and artistic side when they hired acclaimed Romanian visionary artist Costin Chioreanu to tell the story of “…And Then I Saw Blood”. The video chronicles a post-apocalyptic world dominated by A.I. Two dying brothers are brought to a facility where their minds are uploaded into a digital virtual world dominated and controlled by oppressors of mankind. As hope appears to defy the system in place, the two brothers are forced to make a decision to either follow their human instinct or their new found conscious.

KATAKLYSM frontman comments “’…And Then I Saw Blood’ can be interpreted in many different ways as it has an open concept to it. Everyone can see it the way they want but we wanted an animated video done with an artistic flair. Costin was the perfect artist to do it. I told him the central theme of the track deals with the betrayal of two close friends. I asked him to bring in his own world on how he envisioned the song and theme. Costin totally out did himself in this futuristic but realistic interpretation of where we are headed as people continue to get absorbed by technology and this urge to create something bigger, stronger, and more intelligent in this obsession to become godlike.”

Watch the music video for “…And Then I Saw Blood” here:

GHOST reaches into the past for new music video “Dance Macabre”

“Dance Macabre,” already with 15-million Spotify streams, is the second music video and radio single from the Grammy-winning rock/pop band’s most recent album Prequelle (6/1/18 (Loma Vista Recordings / Spinefarm). Simultaneously apocalyptic with catchy, contagious hooks, the song tells of how some people coped with the devastation of 14th century Europe’s Black Plague that wiped out millions – by dancing and partying and seducing until they dropped. The music video puts its own twist on the celebration of the End of Days and beyond.

Twenty-eighteen has been a good year for Ghost. “Rats,” the first single from Prequelle, held the #1 spot at US Rock Radio for a record-setting nine consecutive weeks. In North America alone, “Rats” has been streamed more than 14-million times, its companion music video has racked up more than 13-million YouTube views, and Prequelle has accumulated nearly 49-million streams. Ghost recently sold out the very prestigious Royal Albert Hall in London, and Metallica just announced the band will be Special Guest on its 25-date European stadium tour next summer. Ghost will headline its two-act “A Pale Tour Named Death” Fall North American tour that starts in Dallas on October 25. The North American trek includes two headline arena shows, The Forum in Los Angeles, and New York City’s Barclays Center.

Saint Petersburg (RU) – Prolific Russian Metal group SECOND TO SUN have released a drum playthrough video for “Black Lines.” The song is taken from forthcoming album The Walk and features drummer Theodor Borovski. View it below:

SECOND TO SUN will release The Walk on November 25. As merciless and brutal as the frosts of Siberia, The Walk is available for pre-order digitally through all online retailers and streaming platforms, as well as on CD.
Pre-order:
smarturl.it/STSTHEWALK
Spotify:
https://goo.gl/UPsWmr
Apple Music:
https://goo.gl/UPsWmr