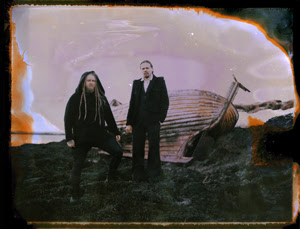 The Icelandic duo Katla, consisting of drummer Guðmundur Óli Pálmason (ex-Sólstafir) and singer/multi-instrumentalist Einar Thorberg Guðmundsson (Fortíð, Potentiam), are now streaming Nátthagi, a second song off their debut “Móðurástin” that showcases once more the emotional density of their elemental art: 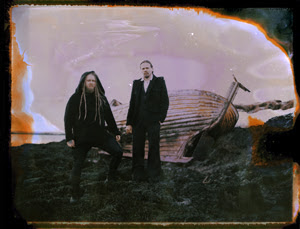 This tune, which sounds like a promise of hope for the revival of nature, came as a welcome breath of fresh air to the two musicians during the writing process for the album and is expected to have the same soothing effect on the fans’ ears, according to Einar:

Artist photo of KATLA“Nátthagi is very sincerely, a positive song. That’s not something that happens for me every day when I sit down and start working on music. I asked Gummi if he could write some uplifting lyrics to the song as well. He wrote about light and the hope that a new day can bring, about the sun being reborn in spring and how it brings new life to this frozen island here in the far north. It fits the song perfectly in my opinion and it’s a nice change for me personally from all the gloom I’ve been putting out through the years.

Musically it could easily be part II of our song Kaldidalur, but has the opposite message, mood and feeling. I think Nátthagi is something you should put on if you are, or want to be feeling energetic and productive. It is definitely the brightest season of our album.”

“Móðurástin” is to be released on October, 27th through the German record label Prophecy Productions. The album can be pre-ordered here: http://en.prophecy.de/artists/katla/

After their splendid cover version of Savatage’s “Gutter Ballet”, it is now time for more: As continuance of their threepart live studio session, the German progressive rockers of Cryptex release their first new song since the great success of the band’s last album Madeleine Effect in 2015: The track is called “Closer” and it’s the first time singer Simon Moskon and guitarist André Mertens have teamed up for a composition.

“What’s special about this song and basically a novelty is the fact that André and I composed, arranged and texted it together. This collaboration works so very well because we perfectly complement one another when it comes to dealing of personal matters. Closer is an unambiguous and hard statement providing deep insights and giving an idea of what is currently about to develop here”, says Moskon.

In anticipation of this release, the band has now launched a new single, ‘King of Storms’, which can be streamed below: