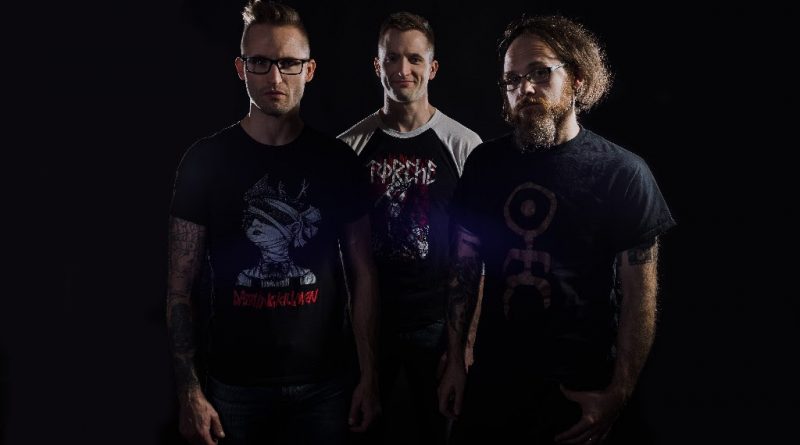 KEN mode are now streaming the first track taken from their new album, ‘Loved’, which has been slated for worldwide release on August 31st, 2018.  The song “Doesn’t Feel Pain Like He Should” is currently being streamed below:

Vocalist / guitarist Jesse Matthewson comments on the new album: “We entered writing for this album with one goal in mind – to please the smile. We wanted to make an album that represented a thinking person’s reaction to the political/technological climate we are existing in today. We wanted to make the perfect album to put on repeat while pushing your physical limits to their maximum, if only to silence the noise that is constantly whirring around inside of your own head, even for a brief moment. We wanted tones that bash and cut, and for you to feel that desperate part of yourself clawing for a way out. And then, just when things are at their most bleak, you start to focus on what’s actually being said, and you’ll see the humor in absolutely everything that is transpiring before you. THAT is Loved.””

Brand new Romanian/Swedish symphonic power metallers CROSSING ETERNITY have posted a new new music video “Ghost Of A Storm” in support of their forthcoming new album “The Rising World” set for its worldwide debut on June 15, 2018 via Rockshots Records. “Ghost Of A Storm” can be viewed below:

“The Rising World” blends elements of modern metal with psychedelic soundscapes alluding to the innocence of the 70s’ rock music. The album contains thirteen epic songs, widely varied in composition and arrangement. The lyrics are a natural extension of this musical experience and they are tales of a spiritual journey. At times they talk about the invisible side of the world, other times they speak of fairy tale magic characters. Human nature and the causal dynamic of human interactions are also among the approached topics.

In regards to recording of the album, singer Berti Barbera says:

“Recording this album was the most challenging vocal experience of my life. It brought back the times me and Manu were playing in a rock band, with all the jokes and high energy. The serious effort made me use a lot of techniques and ways of expression I thought I lost or never use again. This is a great achievement and definitely our best work together in a time I stopped believing in magic. There is something cosmos related in this, it must be. I can’t wait to be on stage with these guys.”

“I wrote the music for this album as an introspective journey, like a confession, a deep soul search, a backward connection, a connection with the almost unseen world of metaphors and symbols, an essential part of our existence. It’s an act of honesty, a musical statement about what we can and cannot see, a story between the tangible and the magical world.”

The adventure of CROSSING ETERNITY started in the summer of 2017, when guitarist/composer Manu Savu entered the studio with a head full of great song ideas alongside fellow Romanian Berti Barbera, the band’s singer and Swedish Uffe Tillman taking on drum duties. Although the band is brand new, the three passionate, experienced musicians bring 25-30 years of experience across all genres with them. This mix of experience and wide variety of musical influences allows them to create a sound they describe as big, organic, personal, vibrant and honest.

Enjoying the privilege of sharing the stage with big names like Uriah Heep, Ten Years After, Scorpions, Larry Coryell, Blood, Sweat and Tears, the band’s main priority is to expand their boundaries and play worldwide, finding opportunities to make their music known and appreciated in as many countries as possible.

BULLET FOR MY VALENTINE release music video for ‘Letting You Go’

BULLET FOR MY VALENTINE have released ‘Letting You Go’, the third track from forthcoming album, Gravity. Check out the official music video below:

Matt Tuck says, “Letting you go was a very challenging song to write in so many ways. It’s by far the most experimental track I’ve ever written musically and lyrically. I really wanted to make a track that stood out from the crowd and separated us from any other band in our genre, and that’s exactly what ‘Letting You Go’ does.”

Pre-orders for new studio album Gravity, along with special bundles, are available now at bfmv.com/gravity. Those that pre-order the album will receive instant downloads of ‘Piece of Me’, ‘Over It’ and ‘Letting You Go’.