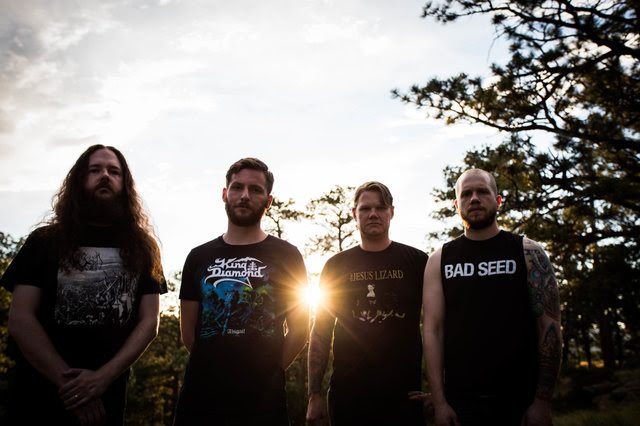 On June 22nd, Denver based four-piece KHEMMIS will guide us into their captivating world of heavy metal and crushing doom with their third studio album, »Desolation«. Having already dominated the US scene and with their previous full length release »Hunted« being named ‘Album of the Year 2016’ by Decibel magazine, it’s now time for KHEMMIS to take over Europe. After releasing the first single ‘Isolation‘, another song from the new album is now available to stream online. Watch the official visualiser for ‘Bloodletting‘, including animated album artwork by Sam Turner and live performance footage of the band, here:

Guitarist and vocalist Ben Hutcherson commented on the track: “‘Bloodletting’ displays a number of new directions we take throughout this album. A big, harmonized overture gives way to soaring vocals and classic metal grooves before dragging you into uncharted, crushing darkness.”

»Desolation« will be released in form of a Digipack CD or LP in two different colors (black and orange) as well as digitally.
Pre-order the format of your choice via this link: http://nblast.de/KhemmisDesolation

The track list of the new album reads as follows:

BLEEDING THROUGH are officially back with a vengeance with this aggressive new full-length offering, »Love Will Kill All«, which was released via SharpTone Records.  Coinciding with the release, the band put online the lyric video for the track ‘End Us’. Watch it below:

Thronetorcher released “Lord Of Disease” as a new video! The song is taken from the new record “Eden´s Poison” which is officially out now via BDHW Rec. Below you can watch the video: