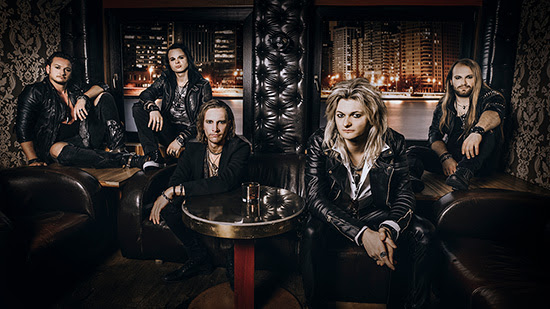 Bring back stadium rock! Today, Metal Blade Records are happy to announce the signing of KISSIN’ DYNAMITE, one of Germany’s most promising rock bands. Sony Music label Columbia will handle affairs and releases of the group in Germany, Austria and Switzerland.

First on the agenda is the release of ‘Ecstasy‘, KISSIN’ DYNAMITE‘s new studio album, on July 6. It is the follow-up to ‘Generation Goodbye‘, (2016), which reached #14 in the official German album charts.

Produced by KISSIN’ DYNAMITE singer Hannes Braun, ‘Ecstasy‘ harks back to the quintet’s unpolished, energy-laden early days, while at the same time marking a turning point in their eleven-year history. In autumn, the group will embark on their first concert tour as special guest since changing labels; from October 26 on KISSIN’ DYNAMITE will accompany POWERWOLF, who are currently breaking all success records, for 16 joint gigs throughout Europe.

Check the first single ‘I’ve Got The Fire’ now below:

Check  metalblade.com/kissindynamite – where you can also pre-order the album.

STORMWITCH have just released the lyric video for the new song “Songs Of Steel”, which is also the album opener of the upcoming record “Bound To The Witch” – watch it below:

The upcoming album was mixed and mastered by Marc Ayerle, and will surely please both old fans and new. Michael Vetter is responsible for the cover artwork.

STORMWITCH’s new album “Bound To The Witch” will hit the stores on June 29, 2018 and will additionally be available as limited edition CD Digipak with exclusive bonus tracks as well as limited edition vinyl LP. You can pre-order it here » https://massacre.lnk.to/boundtothewitch