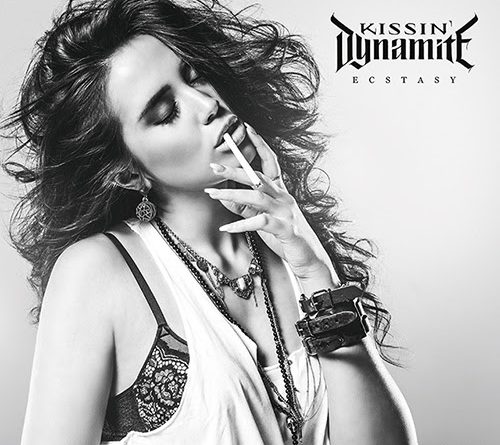 KISSIN’ DYNAMITE has released their new studio album, ‘Ecstasy‘ via Metal Blade Records. It is the follow-up to ‘Generation Goodbye‘ (2016), which reached #14 in the official German album charts.

In celebration of the album’s release, KISSIN’ DYNAMITE is stoked to unleash their new video for the song “You’re Not Alone”. Watch the video here:

Produced by KISSIN’ DYNAMITE singer Hannes Braun, ‘Ecstasy‘ harks back to the quintet’s unpolished, energy-laden early days, while at the same time marking a turning point in their eleven-year history. In autumn, the group will embark on their first concert tour as special guest since changing labels; from October 26th on, KISSIN’ DYNAMITE will accompany Powerwolf, who are currently breaking all success records, for 16 joint gigs throughout Europe.

About ten months after the official release of their debut full-length album called ‘Nigthtmare For Myself’ and still available for CD & digital formats on Bandcamp, Stoner-grunge power-trio from the East of France Sunderfeet just premiered a brand new music video for the song “Mushroom Fail”, shooted by J.R. Wiener. Watch the video below:

New single from MONSTRATH ‘Incubus In Church’ that will be on the album “The World Serves To Evil” that will be released in the second half of 2018 by Downfall Records. Produced by Tchelo Matins. Recorded at Loud Factory and also at the Audiolab Vintage Studio. Mixed and mastered by Tchelo Martins, Tiago “Pardal” Assolin and Wagner Meirinho @ Loud Factory Studio.