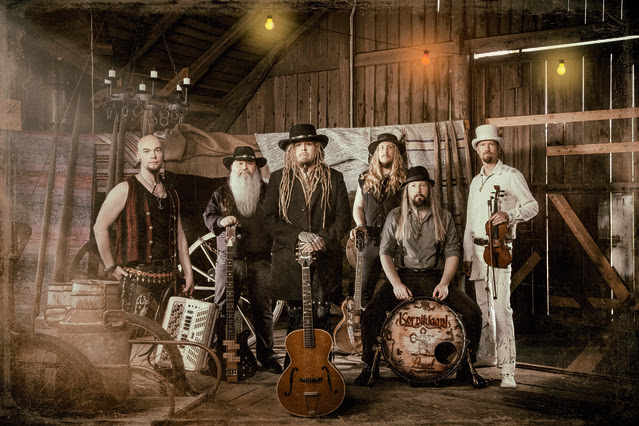 Finnish Folk Metal Superstars KORPIKLAANI recently announced the release of their new studio album entitled »Kulkija« (“Wanderer”) for September 7th, 2018 via Nuclear Blast. To celebrate the start of their summer festival tour, the band has revealed the first single, ‘Kotikonnut’, from their upcoming record. Watch the accompanying lyric video below:

Accordionist Sami, who has also written the track, states, “It’s a midtempo song with a lot of melodies. It was surprising how our lyricist managed to write it, he really captured the feeling and the character of the song. We hope you enjoy it as much as we do!”

About ‘Kotikonnut’ (“Homestead”):
During his journey, a wanderer yearningly looks back on his home, childhood and the beauty of everything. He remembers running with his girl on the meadow, believing it to last till the end of times. Although his home is now the road and a carriage run by joy, he will still always remember the happiness of his home and youth. At the time the moon was golden, shining everywhere at night, lighting up the otherwise dark countryside and the forest. The wanderer eventually accepts that everything that comes, will one day fade into a distant memory.

With 14 tracks and a total running time of over 71 minutes, »Kulkija« is the group’s longest album to date. Working with producer Janne Saksa for the first time, the album was recorded atPetrax Studio (Hollola, FIN) and mixed at Sound Supreme Studios (Hämeenlinna, FIN). Mastering duties were handled by renowned engineer Svante Forsbäck (RAMMSTEIN a.o.).
The cover was designed by Jan Yrlund (BATTLE BEAST, MANOWAR etc.), who has already created several artworks for previous albums and singles for the band.

Founding member Jonne commented:
“We’ve never been as satisfied with a final result as we are with »Kulkija«. We tried to keep it very natural. Like the wanderer, this album is a journey, one that makes you feel good.”

Sami added:
“»Kulkija« isn’t just a collection of songs, it’s a “real” album with a unique atmosphere guiding the listeners through a long journey. All songs were well prepared in advance and nothing needed to be arranged in the studio. Tuomas [fiddle] & I had lots of space to develop and play the folk arrangements.”

American death/black metallers with a Swedish touch, CAST THE STONE, premiere the first single “As The Dead Lie”, taken from their recently announced six-track EP “Empyrean Atrophy”, which is due for release on Agonia Records on the 31st of August. The track comes with a lyric video designed by Scott Rudd Film(Opeth, Rings Of Saturn). Listen to the track below:

CAST THE STONE is Mark Kloeppel (Misery Index, Scour with Phil Anselmo), Derek Engemann (ex-Cattle Decapitation, Scour), Jesse Schobel (Legend, ex-Scour) and vocalist Andrew Huskey. First formations of the band began in 2002, long before its protagonists departed for their better known metal-scene mainstays. While such ties leave a clear mark, CAST THE STONE emerge not as some metal supergroup, but as a project of the original and purest intent of its membership.

Each of CAST THE STONE members is involved in writing music, and each has varying tastes. But they all seem to have one acquired taste in common: an appetite for American and Swedish death metal. On “Empyrean Atrophy”, one can distinctly hear sounds similar to Dismember, Grave, At The Gates, and other proponents of the genre. There are also artisan elements one could liken to more dark and progressive Swedish acts such as Opeth, Edge Of Sanity and Dissection. Perhaps this reason alone, Dan Swanö was a clear choice for production (having produced or had been a member of some of the aforementioned bands).

Hybridizing the dark ferocity of Swedish death metal through a lens of American brutality, CAST THE STONE hits a creative stride with “Empyrean Atrophy”. Guitarist Mark Kloeppel commented, “The band’s sound is a testament to an enduring spirit that’s driven us to return to our most organic influences, merge them together, incorporate disparate elements, and forge our own sound. Each person has a distinct sound unto themselves, so it’s really cool how smooth and cohesive this stuff comes across. You can immediately hear how different this is from the other things we’ve been involved in, yet it’s still very true to our individual styles. Our bassist Derek progressively weaves my guitars and Jesse’s uber-creative drumming style together in a way that only he can. This is all crowned off by Andy Huskey’s crazy death metal vocals which are… well, just listen”.

The album is about the Peasants’ Revolt, a metaphor of the battle between good and evil, honesty and greed. SAGE delivers a mix of heavy, power and progressive metal, even though is hard to define it specifically due to the band’s unique style.

“The band name SAGE means both the plant and flower sage and ‘a wise old man’”, comments Enio Vučeta, guitarist and backup singer of the band, a living legend of the Croatian rock/metal scene, “We wanted to connect this to ourselves in a way because we are composed of several generations of Croatian musicians and we have great ambitions for our music to make a breakthrough in the whole world.”

The first single and video of “Treason” is already available  below: