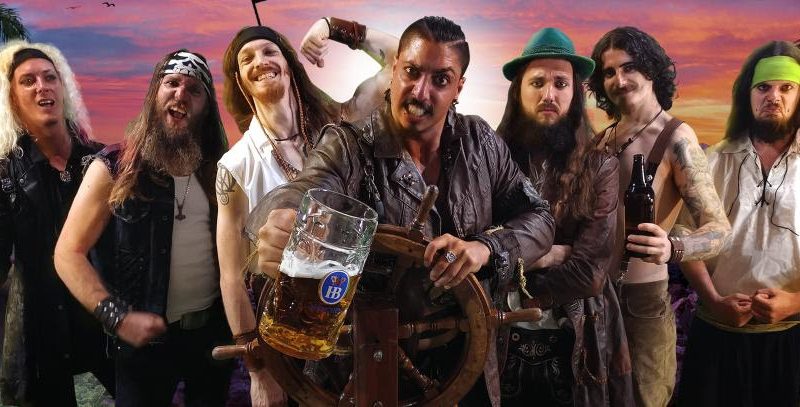 Today, Lagerstein are following up on their ‘Dig, Bury, Drink!’ single with their catchy, rousing ode to the VERY Australian festival tradition – ‘Shoey Song’ is the latest hidden treasure unearthed from the seven-piece crew’s upcoming album 25/7 which sees its release on 23rd August via Kegstand Records.

The video for ‘Shoey Song’ reveals an impressive montage of Lagerstein’s global fanbase (affectionately known as the Lagercrew!), each brandishing a range of footwear in the air, filling it to the brim and swigging away to their pirate’s black heart’s content. Lagerstein want their fans to know: “No matter the brew, it’s best from a shoe! This ones for the Lagercrew!”
As the band continue their voyage across the seven seas on their ‘Endless Rum’ tour (with fans now taking part in a treasure hunt via partytimesahoy.com), pre-orders of ‘25/7’ – along with a variety of pre-order packages – are available through the band’s website – PRE-ORDER NOW.

Gov’t Mule have released the video to the title track “Bring On The Music” ahead of today’s release of their new live film and album Bring On The Music – Live at The Capitol Theatre (Provogue / Mascot Label Group), directed by renowned music photographer and director Danny Clinch (Pearl Jam, Bruce Springsteen, Foo Fighters, Phish).

The video evolves from an intimate acoustic jam to an electrifying stage performance showcasing Gov’t Mule in all their rock glory.

“‘Bring On The Music’ is a song about loss and inevitable change, and also about the relationship between the band and our audience which we feel extremely lucky to have,” shares Gov’t Mule frontman and GRAMMY Award-winning vocalist, songwriter, producer, and revered guitarist Warren Haynes.

DER WEG EINER FREIHEIT  drummer Tobias Schuler has shared a new drum cam video for the song “Neubeginn”, via TAMA Germany. The video was recorded last April in Stuttgart (DE), during the band’s anniversary tour. The track is taken from the self titled debut record, released in 2010. Watch the video below: