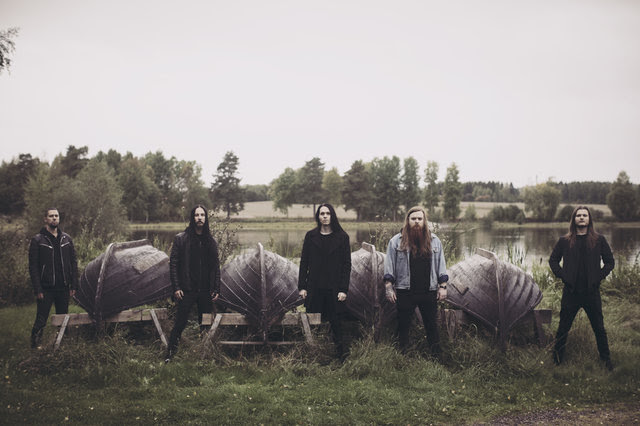 On February 16th, prog extreme metal architects LETTERS FROM THE COLONY will guide listeners into their world of math metal, crushing death elements and virtuosic shoegaze moments, all united in their debut album »Vignette«. After announcing their signing to Nuclear Blast, a calm before the storm prevailed, but now the five young Swedes from Borlänge are ready to attack with a mesmerising music video for their first single ‘Erasing Contrast’. The new clip hits with a surreal intensity and you can watch it here:

Singer Alexander Backlund comments:
“We’re proud to share the first single off of our debut album »Vignette«. ‘Erasing Contrast’ saw it’s completion shortly after I joined the band, and is in many ways the song that set this whole thing in motion for us. The lyrics — which were my first musical contribution — are about this sort of phantom self that haunts all of us; our ideal selves as seen by ourselves or others. We’re all born as blank slates, but along our various walks of life we construct a false perspective.

We’re endlessly comparing our triumphs and failings to manufactured realities sold to us by the media, or by our peers. From birth we’re told of all the things that we could be, but in a world where anyone can aspire to be anything the strong prey on the weak while the rest of us are left to carry the burden of infinite potential. Our self-image will always stand in contrast to all of the things we could have achieved, should we have chosen a different path. This is the nature of our humanity. It’s an inherent flaw within our way of thinking that companies and religious groups love to exploit. Want nothing, have nothing, take nothing, none… except for our album »Vignette«, you should totally buy a copy.”

In addition, the band has unveiled the tracklist of their new album, which was mastered by Jens Bogren (DIMMU BORGIR, OPETH, PARADISE LOST) and reaches a length of over 55 minutes:

»Vignette« is now available for pre-order and you can get the physical editions of the new album here:
http://nblast.de/LFTCVignette

TAX THE HEAT recently announced the release of their new album »Change Your Position«, which will be in stores on March 9th, 2018. »Change Your Position« is the follow up to the 2016 critically-acclaimed debut album »Fed To The Lions« and sees the band taking a huge step forward as both songwriters and performers. The new album stamps its authority right from the off with stomper ‘Money In The Bank’. From the staccato attack of ‘Playing With Fire’ to the huge riffs of ‘Cut Your Chains’, from the garage rock of ‘On The Run’ to the slow groove and instant lyrical hit of ‘All That Medicine’, »Change Your Position« is a lean, focused album loaded with an energy that is set to propel the band to headline status.

Today the band are debuting the second single from the album, with a lyric video to accompany the release. Watch and listen to ‘All That Medicine’, here:

Vocalist and guitarist Alex Veale explains how the track came about: “We had started coming up with initial ideas for songs for what would become our second album »Change Your Position« and it was the moment we had a jam through the riff of ‘All That Medicine’ everything became clear. For me it is the root of the album from which everything else grew. It was inspired in part by ‘Fame’ by DAVID BOWIE, the idea of cycling around a riff and a groove totally appealed to me. I think it’s the one we are most looking forward to playing on the road and making sure that riff really hits hard.”

Pre-order the album, here: http://nuclearblast.com/taxtheheat-cyp
Pre-order digitally to receive ‘All That Medicine’ and ‘Money In The Bank’ instantly or stream both tracks, here: http://nblast.de/TTHAllTheMedicine
Watch the official ‘Money In The Bank’ video, here:
https://www.youtube.com/watch?v=Yul1mivIqNs
Listen in the NB Novelties Playlist: http://sptfy.com/2zZF

SCARS OF ARMAGEDDON has released a new lyric video for the song “Lockdown”. That song is on the album “Dead End”, which will be released December 15th, 2017 as self-release via PURE STEEL PROMOTION. You can see the video below:

Clocking in at just under 70 minutes, “Dead End” immerses the listener with an onslaught of powerful vocals, blistering guitars and a thunderous low-end section. “Dead End” runs the gamut of the band’s musical abilities and artistic visions focusing on memorable choruses and riffs while maintaining an aggressive nature throughout the entire release. The album also includes a guest solo from fellow PureSteel recording artist and former Manowar guitarist, the “Shred Demon“ David Shankle.

The album was recorded at Black and White Studio’s in Mokena Illinois and was engineered, mixed and mastered by Matt Motto (Dissona). Once again returning to handle the artwork duties is incredible freelance artist, and graduate of the American Academy Of Art Lucas Durham. The cover features the return of “Little Gracie”, who has become a staple of all band merch and has become the mascot of the band.