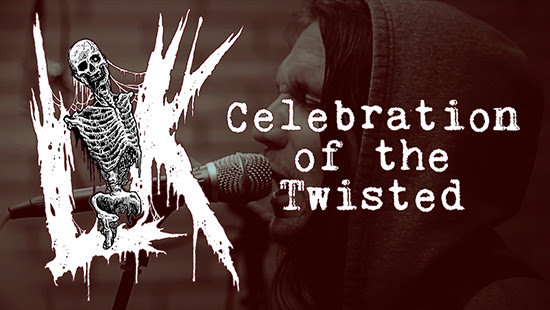 LIK releases video for 3rd single ‘Celebration of the Twisted’!

Death Metallers LIK from Stockholm, Sweden have just released the 3rd single taken off their new album ‘Carnage‘ to be released May 4th via Metal Blade Records. Surf over here to check out the brand new videoclip for ‘Celebration Of The Twisted’:

Comments LIK on the video: “We wanted to depict just how dark and gloomy Stockholm can be during the long winter we’re given here in the north. That sets a mood perfect to write old school death metal. You can say that the inspiration is always just around the corner. The one who knows his or hers Stockholm death metal will rejoice as there’s some major landmarks included in this video!”

The video was shot, produced and edited by Niklas Sandin. Thanks to Jonas Renkse & Linus Johansson.

Surf over to metalblade.com/lik to check out the videos for the first two singles ‘Rid You Of Your Flesh’ and ‘Dr Duschanka’. At the same location you can pre-order the album in the following formats:

BURDEN OF GRIEF recently released the official video for the new single “Broken” – watch it below:

The video is the first part of a video trilogy. The second and third part of the trilogy will be released in the next two months. The video was produced by Peter Kunz / Rough Shot Productions.

“Eye Of The Storm” marks the 7th album of the band and was mixed & mastered by Kristian Kohlmannslehner. Jan Yrlund (Darkgrove Design) created the stunning cover artwork.
You can pre-order the album – which will be released on May 4, 2018 and which is also available as a strictly limited vinyl LP – here » https://massacre.lnk.to/eyeofthestorm

You’ll receive the thrash treatment on this album. But you’ll also find a plethora of elements that go way beyond what thrash is all about. Expect killer grooves, fragile acoustic parts and classic twin-guitar solos as well as the return of the Hammond organ.

Joe Bonamassa called Jeff Beck the greatest rock guitarist ever, and it’s hard to disagree with his opinion. Jeff Beck is a revolutionary, a firebrand, and a genius on the guitar, from his earliest days with The Yardbirds through The Jeff Beck Group and his solo days. Of the British Blues guitarists, it’s hard to find one who is more adventurous in spirit and experimental. Joe is especially enamored with Jeff Beck’s early music with The Jeff Beck Group, when he was recording with fine folks like Rod Stewart on lead vocals and Ronnie Wood on bass. The Jeff Beck Group only released four albums, but this is about quality, not quantity. The first couple, Truth and Beck-Ola are especially worth your time and listening energy.

Joe Bonamassa’s love of the British Blues is at the heart of his musical inspiration; and, for the first time, with this unforgettable performance he was able to give special homage to the British guitarists that inspired him, including Eric Clapton, Jeff Beck and Jimmy Page.