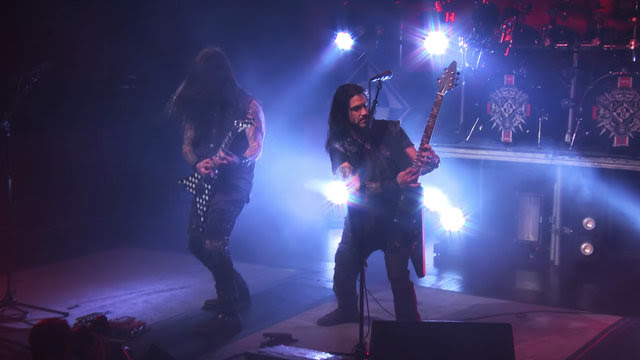 San Francisco Bay Area metal titans MACHINE HEAD, will release their highly anticipated new album »Catharsis« on January 26 via Nuclear Blast Entertainment. Today, the band has released the live video for the song ‘Now We Die’ from the bonus dvd (21 song live concert filmed live at The Regency Ballroom, San Francisco, CA, 2015) of the limited edition of their upcoming album “Catharsis”. Watch it below:

The brand new track from the album entitled ‘Beyond The Pale’, can be heard here:

The band recently started a competition in which they encourage their fans to come up with a music video for said track. Surft to http://nuclearblast.com/mh-beyondthepale for all details.

“I feel like metal could really infiltrate the mainstream with this album. And it needs to… now more than ever. A lot of consideration went into making these songs more identifiable to a wider audience. Simplifying ideas, simplifying hooks, really concentrating on story-telling as opposed to ‘brutal poetry’ or whatever. And while I’d love to say it was all some grand plan, there was no ‘plan’” Flynn adds laughing. “You never know where you’re going to end up whenever you start writing a record… you just write… but I tell ya what… we ended up with a landmark here.
Whenever you finish an album, you always feel proud, but this time… we’ve got something really special. We can feel it. We know it. »Catharsis« could really elevate our genre.”

Portuguese metallers Requiem Laus present their new single “Hate & Despair”, title track of their new EP to be released on the 15th December. Below you can hear the song:

Lyrics of “Hate & Despair” were writen by Jorge Castro (facebook.com/jorge.ribeiro.de.castro). All music recorded by Requiem Laus except drums by Jörg Uken,  mix and master duties by Jörg Uken at Soundlodge in Germany.

New DEINONYCHUS videoclip: “For This I Silence You”

A new dose of Suicidal Doomish Black waiting for the release of DEINONYCHUS‘ coming album “Ode To Acts Of Murder, Dystopia And Suicide” out on December 1st.
It’s the video of another insane and malignant track, it’s “For This I Silence You” and you can enjoy it below:

25 years passed since DEINONYCHUS birth… 10 long years since the last creation of this suicidal icon, already described as an apocalyptic listen, one that will stick with you for ages afterwards, a knife piercing your emotional well-being, “Ode To Acts Of Murder, Dystopia And Suicide” will be out on December 1st and is now available to pre-order from the following http://smarturl.it/DEINODE-CD