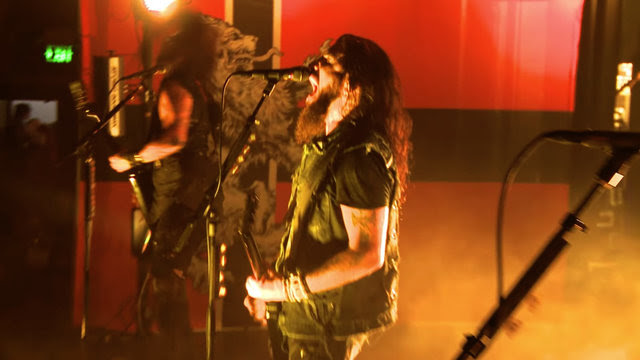 Following up on the highly acknowledged ‘Metal to the Bone’ album, the inheritors of the best traditions of the Teutonic metal, Warfist strike again with a new material recorded for a split release with the black/thrash metal horde Excidium. Both bands have prepared four tracks each for the release that is going to come out under the shared title ‘Laws of Perversion & Filth’. The main motiff of the album cover was developed Marek Szymański, while the graphic design of the entire release was handled by Paweł Ozon.

Guitarist and vocalist Mihu comments: “We wanted our part of ‘Laws of Perversion & Filth’ to be sort of a reflection of the Warfist roots and by that I mean the times when we would lock ourselves in our rehearsal room with a multi-track tape recorder and loads of beer, and record our first songs. The new version of ‘Sadistic Whorefuck’, as well as the cover song, are also a references to those times. We wanted to emphasize the thrash’n’roll attack, without caring whether it would be something innovative or ground-braking… So basically we did what we always do.” Laws of Perversion & Filth is scheduled for a release on 15 January 2018 in CD and Digital formats through Godz Ov War Productions. Get a taste of ‘perversion & filth’ by listening to a two track below:

In collaboration with Riff TV and Studio W66, Warfist also prepared a video for the title track off the latest album, with guest appearances by Heretik Hellstorm (Ragehammer), Hellscreamaross (Offence) and Armagog (Throneum).
The video can be watched here:

‘Nyárutó’ will be released by Nail Records on digipak CD, MC and digital. Worldwide release: 19th January 2018 and distribution will be operated by Plastic Head Music Distribution (www.plastichead.com) – the album will be available on all major digital platforms!

Studio recordings were done by Denevér Studió and final works and mastering by the finnish Finnvox Studios under the direction of Mika Jussila (Nightwish, Amorphis, Sólstafir, Stratovarius).

Direct preorder available from now on through the band’s website:
www.dalriada.net