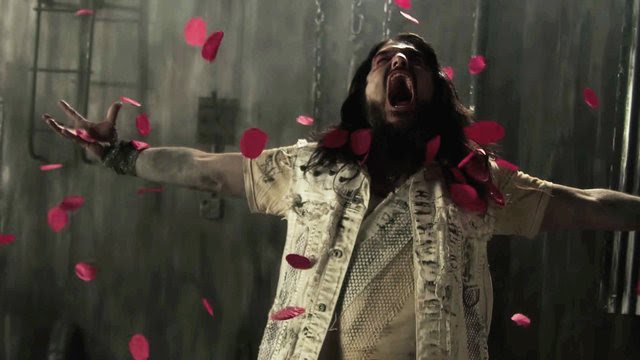 Butoh dance is literally and figuratively the dance of death and pain.

Born from Hiroshima/Nagasaki post-World-War-II-era Japan, the dance was created around the radioactive wasteland left behind in the wake of the nuclear bomb being dropped. Dancers would paint themselves in ash and take on a gaunt, deathly look. Facial expressions are agonizing and the body language is often deformed and contorted, expressing the pain and suffering that was a direct result of atomic warfare.

Frontman Robb Flynn explains, “‘Catharsis’ was a tricky concept to translate to a visual. How do you express somebody’s catharsis? Frasier, the director, brought up the Butoh dance concept and it tied in so well into the idea of what catharsis could be. And when the Butoh dancers began performing for the video, we were blown away. Their expressions were so pained, almost horrifying, and yet very sad, it was extremely moving.”

The other side of MACHINE HEAD‘s ‘Catharsis’ video recounts the experiences of mental asylum patients. Oftentimes, in the ’50s and ’60s, people went through traumatic and regrettable experiences, and those vivid photos still linger today.

Flynn continues, “On a personal level, I related to this aspect. My uncle Jimmy lived with us for years while growing up. He had experienced some pretty severe drug testing when he was younger and didn’t come out of it very well. For the rest of his life, he would do things like not eat for seven days straight and talk to Jesus all day. It was a trip to grow up with that at home. So, we took these disparate elements and turned them into a very cinematic and psychedelic visual to express that.”

Furthermore, Flynn said, “We love making videos now. There used to be a bunch of rules and around what you could and couldn’t do in a music video. Most of it was a boring performance, with us ‘pretending’ to play and sing the song. Now, it’s like making a crazy, whacked-out movie. You can get weird and strange and have a blast. We are super proud of how well this video tuned out!”

Watch the official making of the video here:

Two of Virginia’s finest heavy bands team up for an amp-worshipping, acid trip from hell! The split includes two brand new songs of smoldering gloom and grief from WINDHAND paired with three tracks of devilish, fuzz-drenched metal/punk from SATAN’S SATYRS.

WINDHAND and SATAN’S SATYRS Split LP is due out February 16th on CD/LP/Digital. Physical pre-orders are available via Relapse.com HERE and digital downloads HERE.

Italian technical Thrashers CENTRIPETAL FORCE, who are about to release their debut EP “Eidetic” next 20th of December through Xtreem Music, have launched a lyric-video of one of the songs, and you shouldn’t miss it. You can watch it below:

The musical style of CENTRIPETAL FORCE is a twisted, technical and progressive Thrash Metal in the vein of bands like WATCHTOWER, old CYNIC, MEKONG DELTA, CONTROL DENIED, CORONER, DEATH, ATHEIST…

Release date for “Eidetic” will be December 20th, 2017 through Xtreem Music on CD format. You can visit CENTRIPETAL FORCE‘s official Facebook here: www.facebook.com/Welcometotheforce