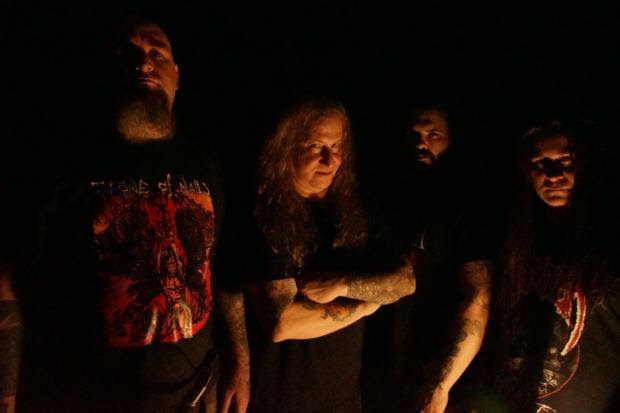 ‘Decimated’ encapsulates the feeling of “The 13th Beast” in the best way possible: Fast, aggressive and relentless. We hope everyone enjoys it as much as we do. See you on the road soon!”

The video was created by Guilherme Henriques (www.guilhermevision.com) and can be viewed below:

Musically, “The 13th Beast” expands upon 2014’s “Dead Man’s Path” yet also incorporates a brutality known from albums such as “The Will To Kill” and “Eternal”, which is further emphasized by Wollenschlaeger’s deeper vocal tone. Just like “Dead Man’s Path”, the record offers artwork by German Latorres, and was mixed and mastered by Dan Swanö @ Unisound.

“The 13th Beast” will be released as 180 gram LP plus 4-page LP booklet, CD, and digital album – presales are available here: https://malevolentcreation.lnk.to/The13thBeastID

Here’s a recap from bandleader Dom R. Crey: “Wow, what a blast! Four weeks, countless shows all over Europe and an incredibly awesome time. At the end of October we started with the guys of Parasite Inc. in the Malady X release-tour and would like to thank all those who came to the shows. The energy that our fans put up here was fantastic. We had never expected that lyrics of the new songs would be shouted at us during those shows – incredible! Just as great was the subsequent European tour with our Finnish brothers in mind, Omnium Gatherum & Wolfheart. Again, a big thank you to all our fans in Germany, Austria, Switzerland, France, Spain, Hungary and Co – you know who you are!”

NOTHGARD have filmed a lot of material during their latest tour and have now launched a videoclip for the ‘Malady X‘ tune ‘Guardians Of Sanity’. Check it out below:

Comments Dom R. Crey: “We have managed to film a new video on tour, this time as a live performance for the song ‘Guardians of Sanity’ from our new album ‘Malady X’. Camera and editing was handled by Wolfheart mastermind Tuomas Saukkonen, who is also producing the clips for his own band. If you couldn’t come to the shows you now have the chance to get a glimpse of our live performance to headbang through your house!“

NOTHGARD have entered the official German album charts with their latest album ‘Malady X‘ on position 53! Click metalblade.com/nothgard to check out all three videos NOTHGARDproduced for ‘Malady X‘ and to order the album. Physical and digital options available.

NOTHGARD are working now on festival appearances for 2019. Stay tuned.

INNERO with the first single online

In this occasion we found INNERO, a name maybe unknown to the most of you but totally worth of a moment of your time. In fact, this is not the average band at all. Formed by ex members of astonishing black metal acts such as Malnatt and Bland Vargar back in 2016, INNERO are the quintessential example of dedication and attitude. Part of the Order Of The Eclipse, the musicians involved in this project have taken their knowledge to an extreme yet poetic musical level, through paganism and mythology, through history and philosophy, following a shamanic path of inner consciousness and renewal.

In “ChaosWolf” you will be able to find the epic of bands such as Primordial and Bathory, the violence of Immortal, the mesmerising soundscapes of Ulver and Dissection.  The whole, merged in a unique and highly evocative mix of emotions, harsh and dramatic at the same time. Below you can hear the first single “The Shaman”: