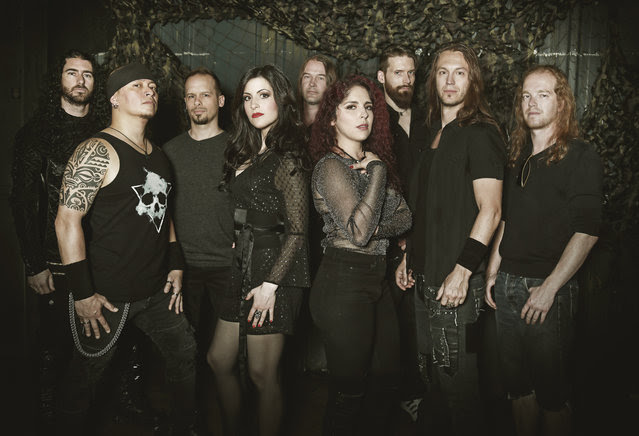 The day has come – symphonic death metal collective MaYaN has released its epic third album»Dhyana«. Together with the City of Prague Philharmonic Orchestra, the band recorded their spectacular full-length release, which reflects on conceptual themes such as self-awareness, relinquishing our ego and self-conceited tendencies to find out who we truly are.

In celebration of the new album, MaYaN have released an official music video for ‘Saints Don’t Die’.
Singer Mark Jansen explains the background of the track: “‘Saints Don’t Die’ deals with wars being fought on the backs of young men and women, who are sent to battle and then suffer the consequences their entire life time, while the ‘Saints’ stay in their ivory towers, just pulling the strings.”

Get your copy of the jewelcase (incl. bonus instrumental CD in O-card), the black or the limited gold vinyl now via this link: http://www.nuclearblast.com/mayan-dhyana

‘The Outer Ones‘ sees REVOCATION pushing both the death metal and progressive elements of their signature sound harder than ever. “I knew that I wanted to go in a darker direction, and this is our most death metal album to date,” states vocalist/guitarist Dave Davidson. “Sometimes when death metal bands go down the prog route they lose some of that edge, but we wanted to keep the aggression at the forefront of what we do while still pushing our boundaries.” Moving away from the societal and historical themes that informed 2016’s ‘Great is Our Sin‘, this time Davidson has immersed himself in the fantastic, evoking one of the great writers of the sci-fi/horror genre. “The title is my ode to H.P. Lovecraft and the entities of pure cosmic horror that rule that universe he created. Since the new music we were writing was so evil and spacey in sections it seemed to be the right title to fit the overall vibe. But while the lyrical content is largely influenced by such writings, in every allegory there is of course some reflection of the real world, so I enjoy writing in a way that could have one overlaying meaning and then another deeper, symbolic meaning as well.“

‘The Outer Ones‘ track-listing
1. Of Unworldly Origin
2. That Which Consumes All Things
3. Blood Atonement
4. Fathomless Catacombs
5. The Outer Ones
6. Vanitas
7. Ex Nihilo
8. Luciferous
9. A Starless Darkness

The lyric video of “The Revenger”, the first single from the Italian gothic symphonic metal band Leaden Tears, has just been released. The single anticipates their debut album, whose release is scheduled for the first part of 2019. Further details of the album will be unveiled soon, while the lyric video is already available at the following link: