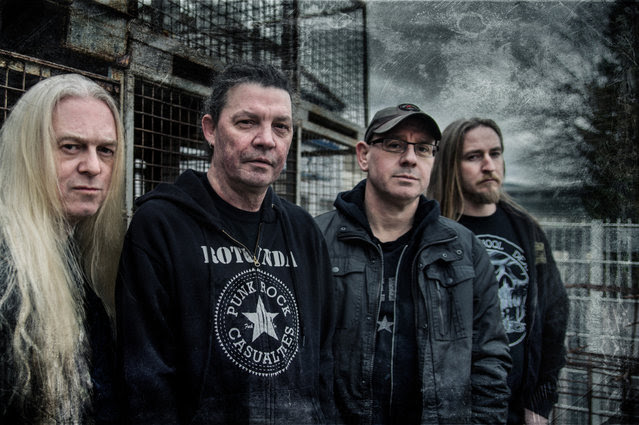 The war rages on! Old school metal veterans MEMORIAM are set to unleash their second album, “The Silent Vigil”, on March 23rd, 2018 via Nuclear Blast Records. Just a year after the release of their debut album “For The Fallen”, the band returns with an authentic, raw offering of old school Death Metal destruction. Today sees the release of the first single off the new album, entitled ‘Bleed The Same’, just in time for the launch of the album pre-order!

MEMORIAM stated about the song:
“Bleed The Same is a response to the fear and hatred that exists in the world that we live in today.  The lyrics are predominately about freedom, equality and justice. This is a theme that is explored throughout the new album The Silent Vigil. The lyrical content of the song is a comment on the rise of nationalistic xenophobic ideologies that proliferate on a global scale right now.
The song was ironically inspired by a speech given by Donald Trump in his inauguration ceremony in 2017.”

Pre-order »The Silent Vigil« digitally and receive ‘Bleed The Same’ instantly or stream the song: http://nblast.de/MemoriamBleedTheSame

Recently signing to Vancouver, BC’s TEST YOUR METAL RECORDS this past December, North Carolina sci-fi metallers XAEL have their next video offering “Last Arbiter” as part of their forthcoming sci-fi adventure album of the same title set for later release in 2018.

Following their previously unleashed story tracks “Apathy of the Immortal”, “Watchers of Xan”, “SRAI (Chained to the Demon of Erring)“ available for free download on bandcamp here. “The Last Arbiter”continues their science fiction experience with the following excerpt.

“I arrived on this alien world, along with the watchers of Xan seeking only their counsel, that they would welcome my wisdom and forsake their warfarin ways. They entertained our thoughts and for a second, took interest in our endeavors but it was short lived.

Upon the chambers of the Tymeer capitol, news came declaring war between the three houses of Tymeer which included the outer colonies of the inhabited star system of Ezhani Yata Edaa.  It was imperative to quail the feuds of the Tymeer, being that they are the great seat of the “tribunal of the outer rim.”  It’s an old world, an odd and barbaric place.

During our visit, we were to witness a odd assortment of events, each one heralded by a enigmatic and cloaked figure, one that I witnessed whispering with one of the master counselors. It seems to be an assassin of a sorts, something we have grown quite fond of in our travels, but this one seemed eerily gifted and was upon our shadows before we were aware.

The warships floated over head as I left the capitol.  Once again, bearing witness to their idiocy, I am leaving them to their fate for it is now none of my concern.  It is time to go into exile once more, for they will soon scar the planet.

As I ventured into the wastelands I could hear the barrage of weapons and explosions, shaking the foundation in which I step.  Fools, for their lust of desire erodes them from within.  Leaving the watchers of Xan in the city, I began walk in the wastelands aimlessly, wounded not by weapons or hate but by the pride and desires of the sentient world, hoping to find purpose once more.”

“We will have eight songs standard and two instrumental tracks. Instead of releasing an album upfront, we want fans to share in our progress in a musical series, releasing two songs a month to allow more time for fans to appreciate the work and for us to best represent the songs in some form of art to convey the entirety of our vision….The album series is called ‘The Last Arbiter’, referring to the protagonist’s mission in the story and his pursuit of an unattainable purpose in pacifying the destructive nature of the sentient world. It will be different and very diverse, but at its core it is extreme metal, melodies in abundance, and storytelling bard style! So I believe it will be refreshing…something different combining symphonic and folk elements with brutal metal…We want to paint a soundscape, a myriad of imaginative and diverse environments while exploring the complications of being sentient and self-aware.”

“We are very excited for the opportunity to open for Septicflesh, Dark Funeral, and Thy Antichrist and especially for our debut show, which will be at Ground Zero (venue) in Spartanburg, SC. Our appearance here will mark the beginning of our live endeavors as we take our show on the road. Having the opportunity to open for music acts that we respect and as fans ourselves is the best way for us to kick off our journey!”

Influenced by bands like Iron Maiden and Dream Theater to Dragonforce and Angra, NOVAREIGN are the next generation of Progressive Power Metal telling stories in musical literature speaking to a generation influenced by epic fantasy tales, comic books and video games.  Having made a reputation for themselves through energy-abounding live shows filled with nonstop shredding guitar interplay and powerful traditional metal vocals NOVAREIGN will debut their album on Feb. 16th via M-Theory Audio. Legends is an hour-plus of over-the-top, shred-tastic epic, yet melodic, power and progressive metal. Take a listen to the next sample from the album, the new single “Heavy Heart”