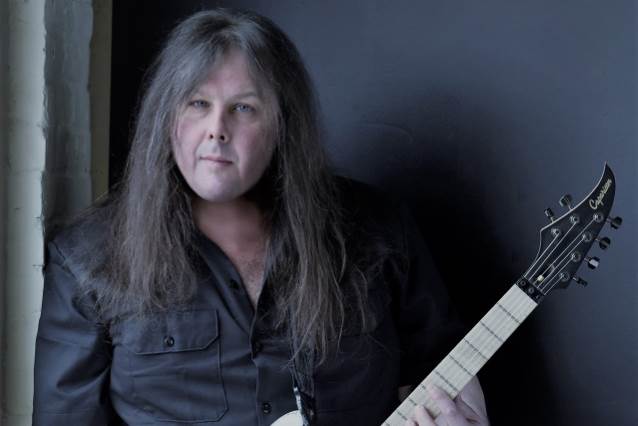 MICHAEL ROMEO today unveils his brand new video for Fear the Unknown, the third track taken from his forthcoming first solo album, War of the Worlds / Pt. 1. About the song Michael  says ‘”Another one of my favorite tracks. This is the second track on the album after the ‘Introduction’, and I wanted something uptempo, melodic, with some ‘riffage’ happening. Fear the Unknown, along with ‘Black’, were two of the first songs I wrote for this album.”

“It’s me putting all the things I love about music in a blender,” says Romeo. “Somebody might listen to it and say, ‘What is this guy thinking?’ But it’s all about being creative and having a good time with it.”

Symphony X fans have been waiting two decades for an honest to goodness Michael Romeo solo album (not counting his 1994 demo recording, The Dark Chapter, which was released in several countries), and the arrival of War of the Worlds / Pt. 1 will be no doubt be cause for celebration. And the guitarist promises a sequel – “Most of Part II is already finished,” he says, “It just needs a few vocals, a couple solos, a few tweaks here and there. I want people to absorb the first one for a while, and then we’ll put out the second record. They’ll complement each other, but they’ll also be a bit different.”

We present you the release of a maelstrom of wickedly intense death metal, in the form of Cronaxia’s debut full length album, the staggering Collapsing The Outer Structure. Cronaxia have been stalwarts of the Portuguese death metal underground for twenty years, with previously just one EP release to their name, 2008s The Solution Above Continuity.  The sheer stamina, dexterity and technical skill required to perform Cronaxia’s music has left band members burnt out and used up, hindering their progress.

Refusing to be delayed any further, band members Felipe (guitarist and founder member), Renato (guitars) and Sergio (vocals) enlisted the help of a session rhythm section, both from the band Grog – drummer Rolando Barros and bassist Alex Ribeiro – to help bring their complex creations to life. The result of this alliance is an album of blistering, hyperactive death metal that goes by the name of Collapsing The Outer Structure.

On September 7th Lusitanian Music will release this collection consisting of eight pieces of wild, inventive, planet-crushing force. Mixed and mastered by Paulo Viera, known for his production work with Ironsword and Ravensire, Collapsing The Outer Structure is a work that walks the tightrope between genius and insanity. With a lyrical concept as brain melting as the music, Cronaxia’s first album is bewildering yet incredible, almost too much to comprehend.

The countdown has begun to that September 7th launch date. Prepare to be consumed, to be undone, to have your brain restructured. This is death metal from beyond the event horizon, from the unfathomable heart of darkness.

Wildheart announced their brand new EP, entitled We Are. The five-track release will see its way into the world on Friday August 31 2018. The announcement comes with the first taste of new music and visuals from the band, the title track from the record, We Are, scoring a videoclip that is released today. The single will be live for streaming on Spotify and Apple Music from this Friday July 20 and Pre-Orders for the EP on iTunes, Google Play and more will go live that day as well.

Wildheart have always been a band to push boundaries, and their latest EP “We Are” showcases their prowess to create vastly contrasting music, whist also enforcing a strong message that is rooted at the ‘heart’ of what they do.

Drummer for the band, Andrew Edward, stated that they are enthusiastic about this release and what the future holds for the band. “We could not be more excited to put this EP out – this is the material we are most proud of so far in our career, and we really hope that people out there are going to love it as much as we do! Hopefully it allows us the opportunity to tour more and get in front of so many more people!”

For the uninitiated, Wildheart are a melodic hardcore band from Brisbane, Australia. After releasing their debut EP “A Thousand Days” in March 2015, followed up by a two-track release entitled “Above/Below” in August 2016, Wildheart quickly moved to make a name for themselves sharing their heavy yet melodic music and showcasing their energetic live show across QLD.

They have since gained a dedicated fan base, and supported bands such as Young Lions, Bare Bones, Hand of Mercy, A Night in Texas, Deadlights, Casey (UK), and Belle Haven.

Previous singles “Exhale” and “D.O.A” premiered live on Triple J’s Short.Fast.Loud with Josh Merriel and the release show for “Exhale” saw Wildheart play a sold-out hometown show at The Brightside supporting Young Lions. To celebrate the release of “Exhale”, Wildheart embarked on a headline tour of the East Coast of Australia before returning home to write, which resulted in this new EP “We Are”.

Wildheart are Axel Best on Vocals, Adam Finlay on Guitar, Kerry Rowe on Bass/Vocals, Andrew Cooke on Drums and Jaya Shinn on Guitar.

They have already been lauded by triple j unearthed staff on the strength of their previous recordings – Claire Mooney, Music Producer at triple j Unearthed said of their track ‘Exhale’ – “I’ve just kicked over everything in the office. I just couldn’t control this absolute force of energy” and head of triple j unearthed, Dave Ruby Howe, thought that their track had “…a massive feel to it”.

Wildheart’s EP ‘We Are’ will be released on Friday August 31 and pre-orders go live this Friday July 20, as will the single for streaming.