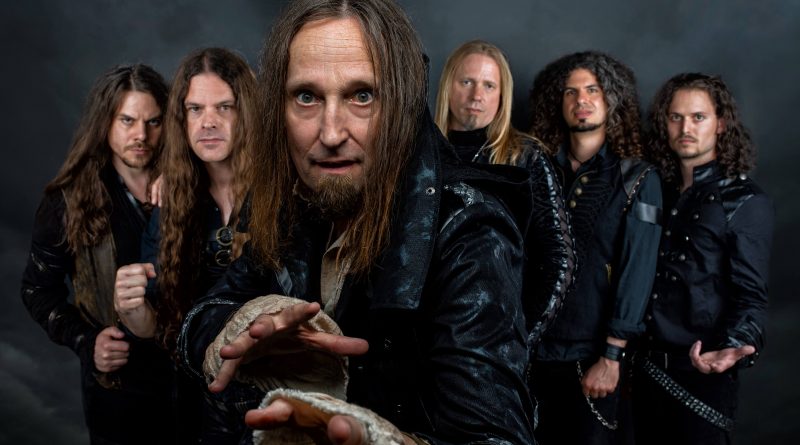 Singer Klaus Dirks explains: “Children’s Crusade tells of an enigmatic movement of children, in the beginning of 13th century in Germany and France. The violent crusades to liberate Jerusalem led to no success. They pushed the people in poverty and famine. One night an angel appeared to a boy with a fateful message: Only a crowd of pure and innocent children could free the Holy Land. The sea behind Italy’s Shores would part for them, to give way to Jerusalem. Called to lead this crusade, the boy gathered more than ten thousand young people around him. The arduous route took its toll, over one-third of the children died by starving or freezing on their way through the Alps. When the sea in Italy would not part, the sullen group of pilgrims broke up. Some settled in Italy, some returned home in shame. Only a few tried to continue their way on ships, to fulfill their holy mission. Foundered, captured or enslaved not a single child arrived jerusalem in the end.”

Members of Extol, The Dillinger Escape Plan and Sea + Air joined their creative forces and will sonically shock you with one of most experimental and mesmerizing releases of this year! Azusa’s debut album titled “Heavy Yoke” will be released on November 16 via Indie Recordings, and the record’s first single and music video “Interstellar Islands” is out now! With “Interstellar Islands”, Azusa takes you into an exploration of dissonant, eerie musical universes; it’s a trip to inner and outer space, an interstellar sensory experience. Enjoy!

A carnival of contrast, Azusa make captivating music with unconventional nerve. Uniting the complementary skills of its members, Azusa’s sound is a thrash-fusion tour de force. Can you imagine Kate Bush fronting Slayer; Death collaborating with Annette Peacock? These allegedly incongruent influences dissolve seamlessly in an alluring sonic alchemy. Uncompromisingly experimental, Azusa’s curated approach showcases each member’s unique strengths as a reaction to previous endeavors, more so than an extension of them. Reflecting on life’s existential mysteries, Azusa’s lyrics seek to explore cognitive dissonances at the crossroads of upbringing, mysticism, belief and betrayal. Defying expectations by embracing contradiction, Azusa finds strength in vulnerability, harmony in dissonance and melody in discord.

The band has commented their debut album: “This album is special for all of us and we’re currently feeling the same excited feelings we got before we debuted any of our previous efforts. We are really fortunate to have been able to create these songs together and to be able to share them with fans of our former and current bands, as well as new fans. It has been such a relief crafting music without having any outside expectations placed on us. Turning to creative playfulness with a more relaxed and intuitive approach to songwriting, we feel that this collection of songs will hold a unique space in the atmosphere of heavy music.”, and they have continued about signing with Indie Recordings: “As for the signing, since Extol had worked with Indie before, they were both located in Oslo – old friend’s and co-conspirators at this point – it made sense for them to release the record as the working relationship was already there. When we met Erlend to discuss Azusa, we felt his vision for his label, his ideas about the industry in general and where he believes our band fits into all of that was impressive. The decision was a no-brainer!”. Head of Indie Recordings, Erlend Gjerde, has added: “Hearing Azusa for the first time was a trip. It struck me as incredibly fresh and diverse, but still perfectly coherent. For me they bring a new angle to the scene which is so much craved for, and I am extremely excited for this release.”

Cloak release video for “Beyond the Veil”

American blackened rockers CLOAK have revealed a new music video for the track “Beyond the Veil”. The song has been taken from the full-length, ‘To Venomous Depths‘, which was released in November 2017 via Season of Mist. Watch the (uncensored) video below:

CLOAK comments: “”Beyond The Veil” is a song that’s grown in meaning and importance the longer it’s been with us. It’s a song about both the fear and comfort of knowing there is something much greater in charge here and the empowerment that it can bring. Regarding the visual aspects, we wanted to work with color this time. Being fans of Dario Argento and classic ‘Hammer Horror’ films, it only felt right to pair the song with rich and powerful colors.”