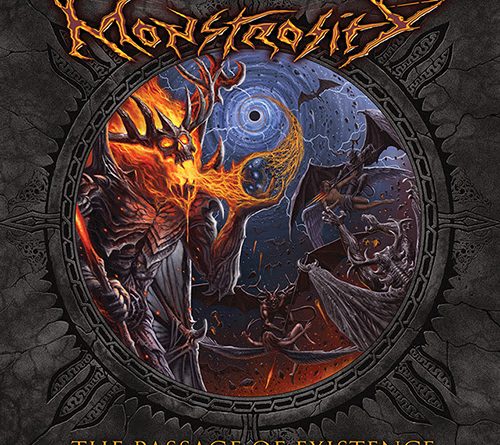 On September 7th Metal Blade Records will release ‘The Passage Of Existence‘, the brand new studio album by Florida Death Metal legends MONSTROSITY! It’s the bands first album in 11 years! For another preview of ‘The Passage Of Existence‘ surf over to youtube.com/watch?v=JmRAk5HblfY to stream the 2nd single ‘Kingdom Of Fire’! Below you can hear the new single “Kingdom Of Fire”:

Further on click metalblade.com/monstrosity where you can check out the pre-order section as well, ‘The Passage Of Existence‘ is available in the following formats: 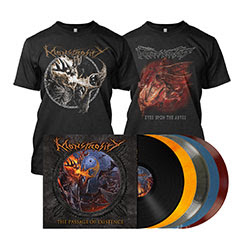 Comments MONSTROSITY‘s Lee Harrison on the new single: “‘Kingdom of Fire’ is the second single from the forthcoming ‘The Passage of Existence’ album. We are very proud to release this one since it has the dynamics and the changes that Monstrosity are known for. This one is a soon to be Monstrosity fan favorite and has lots of peaks and valleys while retaining their awesome brutality. Again, this one is made to be played loud and proud, don’t sell yourself short. Come into the Kingdom!”

Drummer Lee Harrison recorded his drum tracks at Audiohammer Studios in Sanford Florida with veteran metal producer Jason Suecof. A week was spent creating rock solid drum tracks. Guitar and bass tracks were handled at Ascension Sound in Tampa with the vocal tracks being recorded at Obituarys “Redneck Studios” in Gibsonton Florida. The mix was handled by producer Mark Lewis (Megadeth a.o.) and the resulting 2018 album ‘The Passage Of Existence‘ was born. 12 tracks of masterfully crafted death metal for the modern era from the standard bearers of extreme art. MONSTROSITY still stand taller than ever, still delivering their brand of state of the art sonic devastation!

Just over one week ago, iconic rockers OTEP unleashed their most uncompromising, candid, all-inclusive and controversial assessment of the current residing political regime that they have ever released – the new album Kult 45. Today, they have released a shocking new music video – pointing a finger at the NRA and their allowance of continued gun violence – for the single “Shelter In Place”. The video, directed by OTEP and filmed by PR Brown, can be viewed now, here:

Otep Shamaya says, “The video for “Shelter In Place” challenges the NRA’s irrational claim that “only a good guy with a gun can stop a bad guy with a gun”. It aims the blame of mass murders of our children in school shootings directly on the NRA, not necessarily its members, but the administration who continue to fight for people on Terrorist Watch Lists to own a gun. Why? It’s my belief the more murders that occur, the more money they make from weapons manufacturers and increases in membership which strengthens their ability to be a political power that continues to frighten the Republican owned Congress. The number of mass murders of children in schools by gun violence is our national shame yet the Republican owned Congress (and shills for the NRA) have done nothing, not a single thing, to protect our kids. In contrast, when ONE man attempted to detonate a shoe bomb on board a plane in flight, legislation was enacted to protect people from this SINGLE attempt of failed terrorism. Now all of us have to remove our shoes before boarding a flight. All of us have to be searched and x-rayed.  Enough is enough. Our children deserve better. And their safety and the safety of their teachers are worth fighting for.”

Kult 45 is available now in digital formats here, and/or CD and vinyl formats via the Napalm Records Online Store. You can also stream Kult 45 in full via Spotify here. While online, watch a new 20+ minute documentary about the making of Kult 45, performing together as a band, and more, here:

American power trio PRONG has released the new lyric video for the song “However It May End,  which was created by TheCutCartel, Toronto, Canada. The track is taken from the band’s latest album, “Zero Days”( https://Prong.lnk.to/ZeroDays ), which was released last July via Steamhammer/SPV. The disc was once again produced by PRONG mainman Tommy Victor, with trusted collaborator Chris Collier as co-producer and engineer.

Tommy Victor said about the song and the video: “Hey, Prong has a new lyric video for the song “However It May End” from our Zero Days album. I threw some Eastern philosophical ideas in with a Western doomsday outlook for the concept of the song. The video depicts the transcendence with violence. It came out great; check it out!”