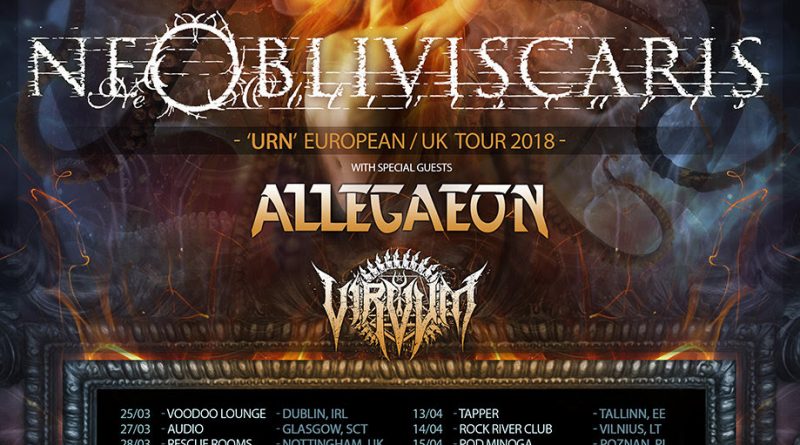 In advance of their European tour starting in Ireland’s capital Dublin coming Sunday, NE OBLIVISCARIS are now revealing the name of their new master on the heavy strings. Italian born Martino Garattoni (ANCIENT BARDS) will take over bass-duties on a permanent basis.

NE OBLIVISCARIS introduce Martino Garattoni via a play-through video of their track “Libera”, which is taken from the band’s latest album ‘Urn’, which is streaming below

Best known for his vocals and bass playing in Canada’s much loved Vesperia, Morgan Rider is proud to reveal is his new video for “The Golden Bough” from his new solo acoustic folk, blues, doom side project DEEP DARK RIVER. The video addresses today’s recent tragedies of unfortunate victims from guns to war and the time to come together as a society and really push for difference from repeating these tragedies over and over again.

Rider comments:
“The song has been the most organic and charged song I’ve ever written. It talks about the very real issues we are facing in 2018 in the wake of yet another avoidable tragedy. Echoing a sentiment of a contemporary of mine: John Lennon. The man preached universal love and unity for people of all walks of life, only to have his own life taken one December night by a man armed with a firearm. How many more people have to lose their lives, how many families will have to put their loved ones into the ground before this crushing reality begins to even create a whisper of change? How long will it be before we realize that we are alone in an incalculably vast darkness; that we only have each other and the other sentient creatures on this planet for warmth and company. The Golden Bough is about stripping away all the petty differences we visualize over our appearances, geographies and beliefs. To brace ourselves for the storm, we need to stand beside each other and remove the crowns we have fashioned for ourselves and for one another; to see what we truly are.”

Watch “The Golden Bough” below:

“The Golden Bough” is one of many tracks that will appear on DEEP DARK RIVER‘s upcoming debut self-titled album. The solo endeavour combines all the humble qualities of blues, folk and classical into a well-balanced, artfully crafted musical reflection on life, hope and old-fashioned storytelling while delivering a uniquely fresh and uplifting listening experience.

“The Golden Bough” is available for purchase and stream on Bandcamp, iTunes, and Spotify.

RIVERS OF NIHIL launches video for ‘A Home

To coincide with ‘Where Owls Know My Name‘s release, RIVERS OF NIHIL has launched a new video for ‘A Home’, directed by David Brodsky (davidsbrodsky.com) – which can be viewed below:

RIVERS OF NIHIL comments: “Once again we have partnered up with the legendary Dave Brodsky and the rest of the fine folks at MyGoodEye Visuals to bring you this video for ‘A Home’ from our new record ‘Where Owls Know My Name’ out today! This video was shot in our hometown of Reading, Pennsylvania, so going along with the song title this video feels very much at home for us. Catch us out on tour for the next five weeks across the US and Canada with Dying Fetus, Thy Art is Murder, Enterprise Earth, and Sanction!”

‘Where Owls Know My Name‘ reunites RIVERS OF NIHIL with Monarchy producer Carson Slovak (August Burns Red, The Last Ten Seconds of Life) and Dan Seagrave, the storied artist behind such celebrated album covers as Entombed‘s Left Hand Path and Suffocation‘s Effigy of the Forgotten. The result is the Reading, PA quintet’s most visceral, accomplished, and satisfying offering to-date.

Guitarist Brody Uttley comments:
“This record is Rivers of Nihil being exactly who we want to be. Many bands get stuck in a comfortable routine of releasing the same album over and over again. Constantly relying on the same familiar formula may work for some bands, but it does not work for us. Music is art, and art is ever-changing. Without change, there is no progress. Without progress, the very fire that powers art and expression will die. This record is the sound of where we come from, where we are, and where we are going.”

Adds bassist/vocalist Adam Biggs:
“This time around, the lyrics feel a little more personal than on previous albums. The story picks up several millennia after the events of ‘Monarchy’, where one person still remains alive, chosen by the planet to be the sole intelligent witness of its ultimate fate. But ‘Where Owls Know My Name’ is less about overarching narrative than our previous albums. The scenario is just a backdrop for the more emotional material we tried to put forth this time around. Ultimately, this is an album about loss, getting older, and reaching a point where death becomes a much more present part of your life.”