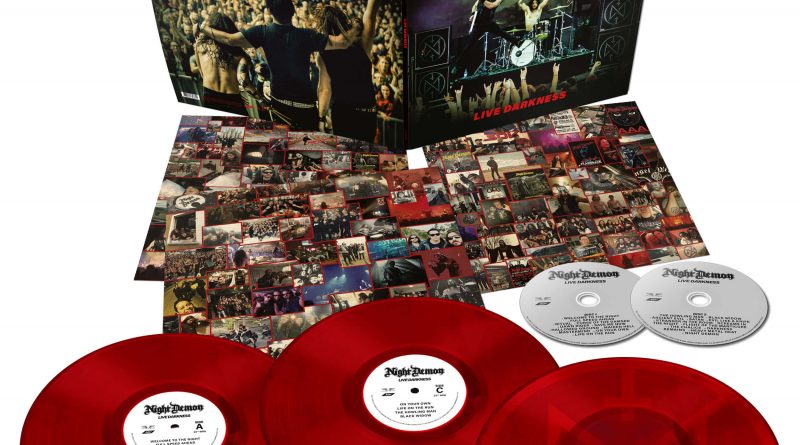 California Metal outfit NIGHT DEMON are pleased to unveil the third offering from the band’s upcoming double live record Live Darkness , which comes in the form for the track “Screams In The Night”.

You can listen to the song here:

Singer Klaus Dirks explains: “Very spontaneous written, the song is based on a riff, which mainly puts the rhythm into the foreground. It quickly turns into a gripping goosebumps chorus with catchy and equally varied arrangements with a dense atmosphere. It also contains slightly folky influences with a triolic feeling. The content is based on “The Dog of Baskerville”, a Sherlock Holmes novel by Sir Arthur Conan Doyle. Supposedly an ancient curse presses on the Family Baskerville: A demon hellhound ambushes the family members in the moor next to the Baskervilles estate. The song takes its title from the mysteriously glowing moor, that enhances the sinister and dark ambience of the story. The Hunter turns into the hunted, as falling victim to his own curse.”

With their blackened death debut »Sounds From The Vortex«, THE SPIRIT rediscover the forgotten spark of the past and set the world on fire again. Immediately inducing nostalgia with their clashing melodies and authenticly rough sound, the band already made waves in the European underground scene and on August 10th, they’ll reissue their icy chimera through Nuclear Blast.

Now, the band unveils a lyric video to their second single, ‘Cross The Bridge To Eternity’. Watch the new clip here:

Download or stream the single via this link: http://nblast.de/SpiritCrossTheBridge

Front man M.T. states:
“This song is an expression of pure emotions and feeling, the essence of THE SPIRIT. When each other path is closed, thou shall Cross the Bridge to Eternity.”

»Sounds From The Vortex« is now available for pre-order as CD, LP (black and clear) and download. Get the version of your choice here:
http://nblast.de/TheSpiritSFTV