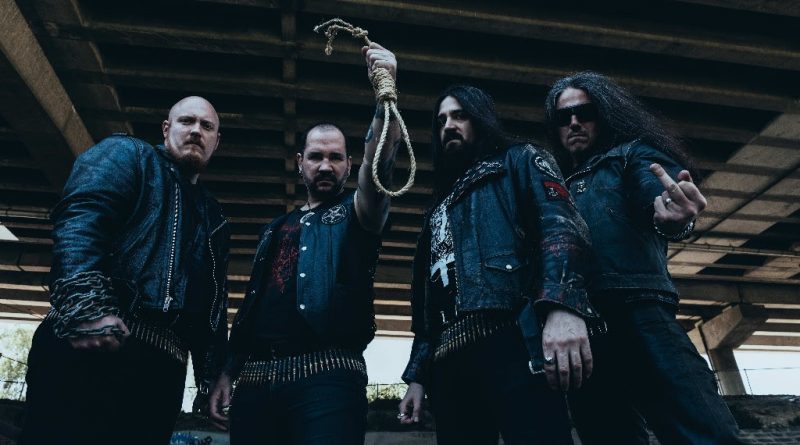 NOCTURNAL GRAVES are releasing the second single taken from their forthcoming new album, ‘Titan’, which will hit the stores on May 18th, 2018. The Australian extremists are now streaming the brutal track, “Silence the Martyrs” below:

Lexington, KY (March 20, 2018) – SOCIETY’S PLAGUE have revealed their new “Ashes for Air” music video. This is the second music video from their new album Call to the Void, which comes out worldwide on April 27, 2018 via Eclipse Records. The video was directed by Corey Dupree at Foxfed Productions. It was filmed at a local church in a room, which is closed to the public for safety reasons. Rumors of strange activity as well as first-hand accounts of possible paranormal activity from staff members made this a go-to location for the filming of this video. Below you can watch the video

“A staff member kept telling us stories about the super-creepy things that have happened when he’s there by himself at night” says guitarist Joe Royer. “He told us about hearing children playing and running around, only to find the room is empty. Often, he finds things moved at night to different places than where he left them… there’s lots of stories like that. Luckily, only minor injuries were sustained while filming the video, and twenty Taco Bell quesadillas were consumed.”

Call to the Void comes out on April 27, 2018 via Eclipse Records. The new album features ten crushing tracks, including Björn “Speed” Strid (Soilwork) on guest vocals for the song ‘Distant Waves’. The self-produced album was recorded & mixed at Subterranean Studios in Lexington, KY, and mastered by Alan Douches (Mastodon, God Forbid, Converge) at West West Side.

Pre-order Call to the Void on iTunes, Amazon, or Google Play, and stream the singles on Spotify, Apple Music, and Deezer, with more options coming soon at this location.

One of Brazil’s more important names in the hardcore scene, Grinding Reaction just shared news about their new album. With the title “O Caos SErá a Tua Herança”, this new album already has a cover new single that you can hear below:

The artwork was made by long time friend Osvaldo Salmazo Júnior, who was responsible to develop the idea that Grinding Reaction created in the lyrics created in the album, where the band focus on all the problems like greed, ambition, violence, alienating media, slave work and a system that only sees profits of a few that rule the machine of the capitalist system.