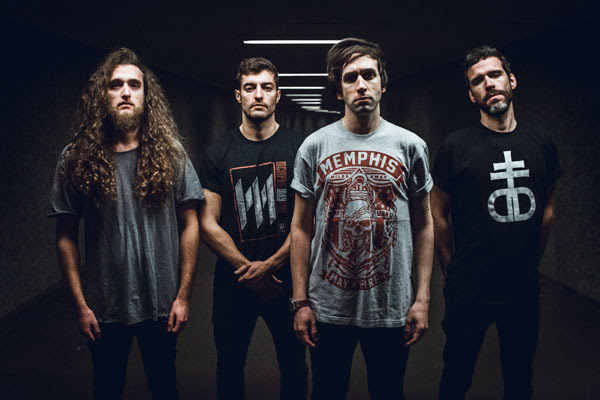 Portuguese alternative-metal group Nowhere To Be Found today share a new video for the track “Closer” off the band’s forthcoming second album due for release later this year.

An original by The Chainsmokers, “Closer” features guest vocals from September Mourning’s Emily Lazar and is set to appear on the band’s second album currently in the works with acclaimed producer Henrik Udd (Bring Me The Horizon, Architects, etc…). You can watch the video below:

After building a strong local following in the Los Angeles area with powerful live shows that feature stunning musicianship, the progressive power metal quintet NOVAREIGN – whose new album, “Legends,” has been praised as “a bombastic mix of epic metal” (BraveWords) and “an instrumental fireworks show” (Metal Bandcamp) – will hit the road this summer for a West Coast tour with the power/thrash group Railgun. In addition, the band will also perform at select shows alongside Angra, Powerglove and label mates Graveshadow in the coming months. All of the group’s currently confirmed tour dates are listed below.
NOVAREIGN guitarist Danny Nobel says that the band is looking forward to hitting the road. “We are ecstatic to embark on this quest with the boys in Railgun,” he says. “The guys have been great friends of ours for quite some time, and they’re talented young cats who are really fun to be around. We also felt that our sounds complement one another well, so it seemed only fitting to have them join us on this tour. It’s sure to be a killer time with more shred than any mere mortal can ever handle!”
In recent months, NOVAREIGN has performed throughout Southern California alongside the likes of Michael Schenker Fest, Act of Defiance, Exmortus, White Wizzard, Bonded By Blood and Holy Grail. Still, while guitarist Balmore Lemus has toured previously with other acts (including Dire Peril, who recently supported Sirenia), the shows with Railgun mark the band’s first official tour. “To be honest, NOVAREIGN as a whole are virgins to the road,” Nobel says. “You always want to start at home, so a West Coast tour seemed like the perfect way to get the party started. After we get our feet wet on our own turf, we’ll traverse the States to a farther extent and beyond! No territory is safe!”
To celebrate their upcoming tour, NOVAREIGN has unveiled a lyric video, created by Scott Rudd (Opeth, Fallujah), for the “Legends” track “The Builder,” which can be seen below:
Says Nobel, “‘The Builder’ is a song that paints a color of its own in relation to the rest of the album, as it’s the only mid-tempo song. It tells the story of a being – be he fictitious or of practiced belief – who is the creator of all things, physical and abstract alike. The creator of time, space and the cosmic ocean herself. The sculptor of fortunes, if you will. A being of this caliber would most appropriately be the subject of some form of worship, and the song celebrates the existence of a figure like that. Though it’s not a sermon or anything, it’s kind of cool to talk about all-powerful beings like that. I’d say some comic book elements were a huge influence to the lyrical theme. It’s a fun song to play, and hopefully, a fun song to sing along to.”
Influenced by bands ranging from Iron Maiden and Dream Theater to Dragonforce and Angra, NOVAREIGN personifies a new generation of progressive power metal, with adventurous, virtuosity-laced musical tales influenced by epic fantasy tales, comic books and video games. After steadily and surely building a buzz with energetic live shows filled with nonstop shredding guitar interplay and powerful traditional metal vocals, the group released their debut album, “Legends,” in February.

‘This is where the journey takes an second departure’

A year after the official release of their debut full-length effort, French cinematographic postrockers SYNOPSYS just shared – with the courtesy of Score A/V Digital and Wherepostrockdwells Channel – a new live video for the song “A Whisper In The Evening” available right now below:

In other news ‘Le Temps du Rêve’ is still available for CD, LP & Digital formats but also entire streaming on on Bandcamp.