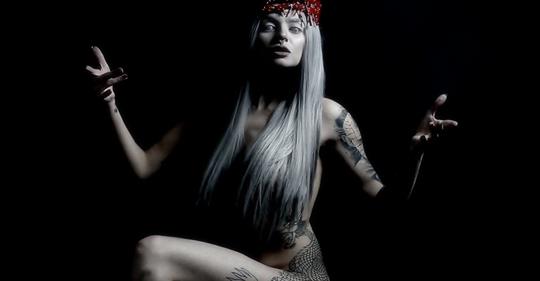 “OKKULTIST is the kind of band the Portuguese scene needs: talented, young, focused and just fucking brutal.“ The Moonspell vocalist and Alma Mater Records owner comments. “Portuguese Death Metal has never sounded so exciting in my ears so we can’t wait to release this beast upon you and help you to reinvent evil together with this amazing Portuguese talent.”

Reinventing Evil is a brutal debut of an album, featuring 8 rabid and fierce songs to seem coming straight out of hell. Today OKKULTIST are serving another evil appetizer with the official music video, Sign of the Reaper, created by the band’s vocalist and demoness Beatriz Mariano.

“For the third release, we picked a track that again, bleeds our message and will send shivers down your spine.“ the band comments. “And once again, Okkultist meets the vision of our lead vocalist on a new wickedly intense $0 budget production.”

On March 29th, FOREVER STILL will unleash their sophomore full-length release »Breathe In Colours« via Nuclear Blast. Inspired by a dystopian cyberpunk future and the fact that some of the biggest works in that genre, Blade Runner and Akira, are set in 2019, Denmark’s highflyers have adapted a dark musical concept for this record and take a look at the world being on the verge of ecological collapse, while humanity is fleeing into cyberspace to escape the horrors of the real world.

As it seems, the Danish quartett never sleeps – so in addition to shooting a music video for their previously released single ‘Rew1nd‘, the band has also recorded their rehearsal session, which not only shows the band’s unbound stage energy, but also Maja Shining‘s new theremin skills that you will hopefully be able to witness on tour later this year.

“We learned a lot from touring all over Europe in support of our debut album, Tied Down, and it influenced a lot of the songwriting for the new album”, Maja explains. “It’s very much written to be performed live and to give you a small taste of what to expect for our upcoming shows, we decided to invite a film crew to document one of our early rehearsals. The complete session is available on a USB stick as part of our pre-order bundles at our homepage.”

Watch the first excerpt of that rehearsal session in form of the epic hymn ‘Rew1nd‘ here:

PERIPHERY DEBUT “GARDEN IN THE BONES”

“Garden In The Bones” is the second song to be premiered from the nine-track album, with Periphery kicking off news of the forthcoming album’s release by debuting “Blood Eagle” via Sirius XM, with a video (https://youtu.be/SzznL_8DIUM ) released the following day. Revolver said of the song: “Periphery’s dedication to technical craft and ambitious output shines brightly on ‘Blood Eagle,’ a freewheeling song rife with changing personality and blistering aggression. Polished and impressive, the track is a marker of maturity and gentle evolution in the band’s repertoire.”

Watch Matt Halpern‘s drum playthrough of ‘Garden In The Bones: