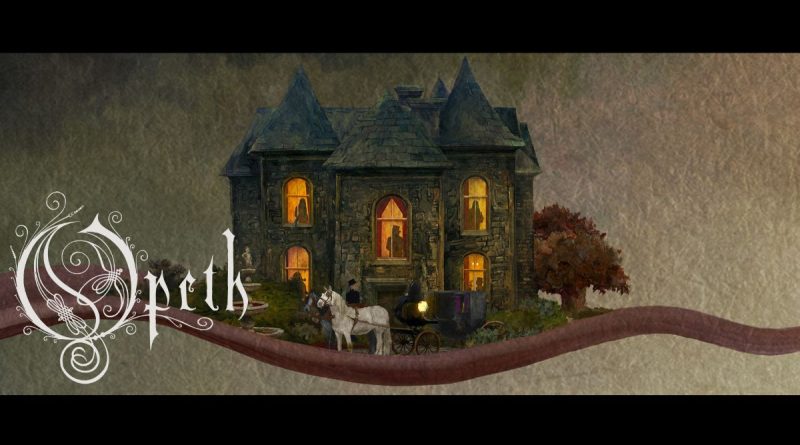 One of 2019’s most anticipated heavy rock/metal albums, »In Cauda Venenum«, will be released by Swedish prog-masters OPETH on September 27th via Moderbolaget /Nuclear Blast Entertainment. Today, the band has unveiled a bi-lingual visualizer the record’s first new song, ‘Hjärtat Vet Vad Handen Gör‘ / ‘Heart In Hand‘, and has invited followers to pre-order the record now at www.opeth.com/stores.

Watch the visualizer for ‘Hjärtat Vet Vad Handen Gör’ / ‘Heart In Hand’ below:

Commenting on the new song, vocalist/guitarist/songwriter Mikael Åkerfeldt says,“’Hjärtat Vet Vad Handen Gör’ or ‘Heart In Hand’ as it’s called in English is one of the first couple of songs I wrote for »In Cauda Venenum«. I immediately knew that it would probably be favoured by ”the powers that be” when talks of future singles for the record would commence. And I was right. I generally leave it up to the labels or managements to pick the so-called singles. I’m indifferent as I put an equal amount of dedication into all songs, so it doesn’t matter all that much to me. I guess it’s one of the more straightforward songs on the album. A rather rocking little thing. It’s got one of the ”happy mistakes” in it too. Mendez bass broke down in the middle of recording. At the time he played an old Hofner Beatles-esque bass guitar that started humming real bad, but it sounded so good we immediately decided to keep it in there. I’d be putting myself down if I said that noise is the best part of the song, but it’s up there. I like when stuff happens out of your control, and it actually adds to the piece. This is the first full taster of the new OPETH album, and of course I hope you like it. All the songs on the new album are different from each other and therefore equally representable in my view. Enjoy!”

Recorded last year at Stockholm’s Park Studios, »In Cauda Venenum« will be released in two versions, in both Swedish and English languages.

Regarding the sonic direction of the new record, Åkerfeldt adds, “For us, at this stage with »In Cauda Venenum«, heaviness isn’t guitars tuned down with screaming vocals over the top. That’s not necessarily what I call ‘heavy’ music these days. I can listen to KoRn and say, ‘OK, that’s heavy.’ But it doesn’t really mean anything to me. I mean, I catch up on things in magazines or online. I read about bands that have the ‘heaviest record ever,’ and I’m not too impressed by that. OK, it’s cool but what does it say? What does it mean? It’s an impossible mission, to be the heaviest. That’s been done before. Over time, I got tired of that tag. Of course, when I was younger it meant everything to me. I was always on the pursuit for heaviness in my youth, trying to find the next level of heaviness. First it was death metal, then it was bands like Meshuggah, but heaviness is now more about emotions, heavy chord progressions, music that has feelings. Heaviness doesn’t mean Meshuggah anymore, although indeed they’re a fucking heavy band. I’m not trying to tap into that anymore.”

Brisbane’s Hard Rock/Metal newcomer legends Pavilion are today announcing the imminent and explosive arrival of their brand new single ‘HELLFIRE’!  The four-piece outfit are unleashing the single into digital stores and streaming platforms now and will be available on Friday at http://ffm.to/pavilion_hellfire. In the meantime, they are unveiling their filmclip for their debut track!
The videoclip was filmed in South-East Queensland’s hinterland and was shot and edited by Third Eye Visuals, who are also responsible for filmclips for tracks from Parkway Drive and In Hearts Wake, as well as promo videos for Tapestry, Justice for the Damned and more. The outfit perform the hard-out track surrounded and seemingly engulfed by fire. At the end of 2018, Pavilion recorded this track among others yet to be released at Arcadia Recording Studios in Eaton’s Hill with engineer Gareth Hargreaves.
Vocalist Peter Muldoon mused on the meaning and themes of the fiery track. “This song explores the guilt and remorse associated with one’s actions through the adoption of heaven and hell. The ideology that sins must be paid for illustrates certain and familiar imagery for the listener.”
“The particular action in this song is left undetermined, allowing the listener to create their own version of sin and adapt the song to their own lives. Whether or not you are a believer of the afterlife, all actions have their consequences.“
The quartet are also today announcing their single launch shows – The Hellfire Tour! They will hit hometown Brisbane at Woolly Mammoth in the Fortitude Valley on Saturday August 17, alongside heavyweights Valhalla Lights, Void Matter and Zero 1 Zero, with tickets available now at moshtix.com.au. September will then see them head below the border into New South Wales for a show at Sydney’s Crowbar on Thursday September 12 and then into Newcastle on Saturday September 14 at Stag and Hunter!
Formed by vocalist and guitarist Peter Muldoon and guitarist Michael Fabricato, Pavilion take influence from heavy rock and alternative metal to create a sound of their own. Their structured combination of riffs, solos, melodies and drops creates a unique style that enables them to engage with a variety of audiences.

The new CRYSTAL BALL video is here, and it’s not for the faint of heart! In “HELLvetia”, you’ll also get to meet Heidi and others, that are featured in the upcoming movie “Mad Heidi” from the producer of the movie “Iron Sky”, Tero Kaukomaa. Due to a few violent and gory scenes in CRYSTAL BALL’s video, an age restriction has been enabled. Watch the video here:

“HELLvetia” is taken from “2020”, the upcoming best-of album by CRYSTAL BALL, which includes 20 tracks on 2 CDs: 10 re-recorded and newly interpreted songs from the band’s first decade, and 10 melodic metal tracks from the band’s second decade, which were either re-recorded, newly arranged and/or enhanced with additional recordings.

You can pre-order the album here » https://lnk.to/crystalball2020

“2020” is an album for die-hard fans that are around since the band’s early days but also for those who have barely heard of the band before. Needless to say that this album should be part of every record collection! It will be released on August 2, 2019 via Massacre Records.