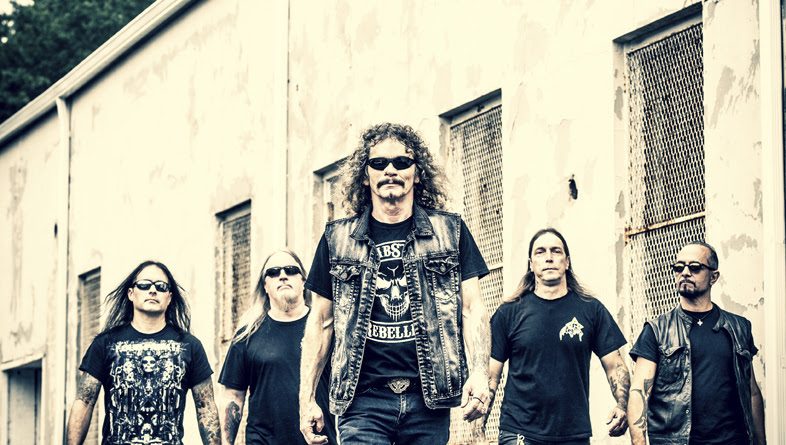 Bobby “Blitz” Ellsworth comments, “The time has come, for a first taste, ‘Last Man Standing‘.  This cut got the unanimous nod to open The Wings of War, all they way back to the first demos in March, so much so, it was mock titled OPENER up until the recording.  Sometimes everyone is on the same page, wtf!.  So dig into some old school thrash, with a side order of Jersey made, head-banging.”

»The Wings Of War« was recorded at Gear Recording Studio in New Jersey, SKH Studio in Florida andJrod Productions with engineering handled by DD and Dave. The album was produced by the band whileChris “Zeuss” Harris.handled the mixing and mastering. Travis Smith (NEVERMORE, OPETH, SOILWORK, DEATH…) was once again enlisted to create the artwork for the album.

Mark Morton, the prolific guitarist of Lamb of God, has announced a new project that sees him further explore his creative drive for writing and collaboration. Joining forces with WPP Records and Spinefarm Records on a worldwide basis, Morton will release a 10-track album under his own name and titled Anesthetic. It arrives on March 1, 2019 but CD and vinyl pre-order and merch bundles are available now at www.markmortonmusic.com.

Listen to the lead track “The Truth Is Dead,” featuring his Lamb of God bandmate Randy Blythe and Arch Enemy vocalist Alissa White-Gluz in the lyric video below:

The full track listing, complete with the list of guest artists is below. The album was made alongside a dream team of highly respected musicians from a multitude of musical worlds; some friends, and some who would never be expected to collaborate with metal genre leaders Lamb of God.

Morton had been writing some of this debut for years. “This album wasn’t a concerted effort to start something outside Lamb of God,” he explains. “Music is always in my head, and until I write and record it, it’s stuck there. But once I record it, it’s out. It’s a catharsis, more for my own sanity.”

At the end of the year of the album release, ASH OF ASHES have created a very special treat for their fans: A music video for the title song “Down The White Waters”, which in less than three months could reach the absolutely remarkable number of 90.000 Spotify plays for a newcomer! The epic Metal song has thus received the appropriate and mood-appropriate images, and was produced by the band themselves with the help of friends. The recordings for the video were made in Norway as well as in the native Sauerland. It is about departure and the journey into the unknown. For ASH OF ASHES, the journey has just begun …

Only every few years appears in the spiritual-natural, epic-pagan area of ​​the upscale Heavy Metal, a very special album classic, which seeks on a wide, artistic area of ​​its kind. And “Down The White Waters”, the debut longplayer of ASH OF ASHES, joins this exquisite guild quite clearly and sublime. The always accessible, often highly catchy and even clearly hit-capable compositions wander with healthy pride on melancholy, partly sad levels. But the musical soul of the band is free of bitterness and always focused on timeless aesthetics.