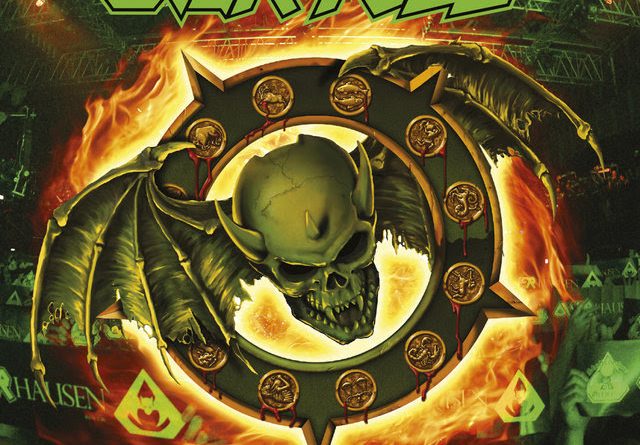 Legendary New Jersey thrashers OVERKILL have announced that they will release their “Live In Overhausen” album on May 18, 2018 via Nuclear Blast. Today, the band have released the video clip for the second digital single “Thanx For Nothin’”. The video can be seen here:

The band states:
“I think what made this special for us was all of our involvement from start to finish, the guys, the label, the agent.  I remember DD and I talking in Belgium at the Alcatraz Fest, about doing both records for the DVD.  It couldn’t have been more than 5 minutes later, our guy Jaap, from NB walks in …he says:’both? In one night?’ – ‘Yea, both…..it’s fucking Overkill'”

Pre-order »Live In Overhausen« here: www.nuclearblast.com/overkill-liveinoverhausen
Order your digital copy of the album on either iTunes or Amazon and receive ‘Hammerhead’ and ‘Thanx for Nothin” instantly!

NOCTURNAL GRAVES are releasing the third crushing track taken from their forthcoming new album, ‘Titan’, which will hit the stores on May 18th, 2018. The Australian extremists are now streaming “Souls Tribulation” below

NOCTURNAL GRAVES comment: “Souls Tribulation” is about crossing the borders into the depths of insanity, of chaos in order to find wisdom in Darkness.

North Carolina riff-rockers ASG re-emerge with their sixth-full length and first new album in five years, Survive Sunrise, due out June 15 on CD/2xLP/Digital via Relapse Records. Hear the opening, title-track “Survive Sunrise” below.

ASG’s sixth studio album Survive Sunrise is due out June 15th on CD/2xLP/Digital via Relapse Records. Physical packages are available via Relapse.com HERE and Digital Downloads / Streaming Services AT THIS LOCATION.