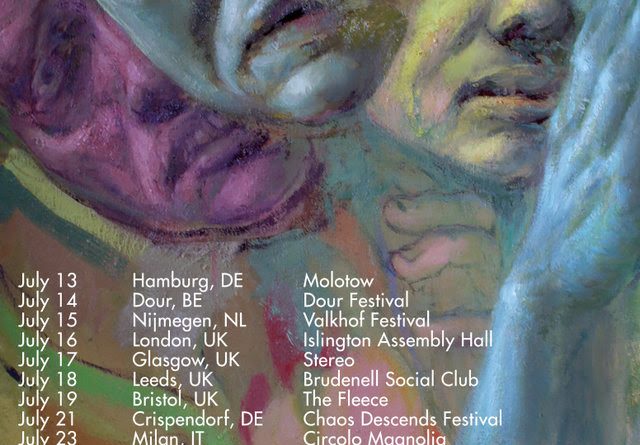 To coincide with this release, the band have also made an accompanying mini doc available which gives a behind the scenes look at the recording of ‘Dropout’ – recorded at Fellowship Hall Sound in Little Rock, Arkansas. Check it out here:

Comments the band on the single: “We have almost always written music intended to exist as part of an album, with common musical and lyrical threads that tie many elements together into one release. Being freed from those confines in recording this song allowed us to  explore themes and immediacy that might not have been uncovered in our more typical “large format” composition process.”

On June 29th, British cult metallers PARADISE LOST will release a new version of their eighth full-length album »Believe In Nothing« that initially saw the light of day in 2000. The band was never really satisfied with the overall production and artwork of this record, Jaime Gomez Arellano remixed and remastered the twelve tracks and Branca Studio designed a dark and moody new cover artwork, to bring it closer to the initial vision that the band once had for their gothic rock album.

“It’s no secret that we were never entirely happy with the production on this record, despite really liking the songs,” states singer Nick Holmes. “It’s been a long time coming, but we finally found the right moment to go back into the studio with Gomez and play around with it. We hope you all enjoy the remixed version so you can hear how the songs were meant to sound.”

Today, PARADISE LOST reveal a lyric video for the remixed and remastered version of their hit single ‘Mouth‘ that you can watch, here:

The album will be available as digipack (with two bonus tracks) and for the first time ever, as 180g double-vinyl in three different colours (black, white and the mailorder exclusive bi-coloured black&white). Pre-order starts today, you can get your copy here:
http://nblast.de/ParadiseLostBIN

After taking the world of rock music by storm with last year’s surprise hit »Amber Galactic«,which was nominated for a Swedish Grammy and accompanied by a European tour that left fans speechless, Swedish classic/progressive rock supergroup, Swedish classic/progressive rock supergroup THE NIGHT FLIGHT ORCHESTRA are set to release their impatiently awaited next album, »Sometimes The World Ain’t Enough« on June 29 via Nuclear Blast.

Today sees the release of the first single off the new album, entitled ‘This Time’, just in time for the launch of the album pre-order!

Commented the band:
“Recording the video for our first single ”This Time”, was like combining different dimensions in a space cocktail. Numerous times during the video shoot, band members had to call the tax authorities, to confirm their names in the register, to make sure they had not lost all contact with reality. The result is surely mesmerizing and will take you on a journey that will be hard to digest. This is also our first video featuring the ”The Airline Annas”, our beautiful and super talented back up singers. They certainly made this video sparkle. The song itself, is the album opener and might not be representative for the whole album – no song really is, but we just like it that way. We make albums and each and every song leads it‘s own little life and together they form a celebratory album with class, hooks and a bass that could walk a million miles without stopping for a drink. This trailblazer of a song used to be just ours, now it‘s yours too. Enjoy!”