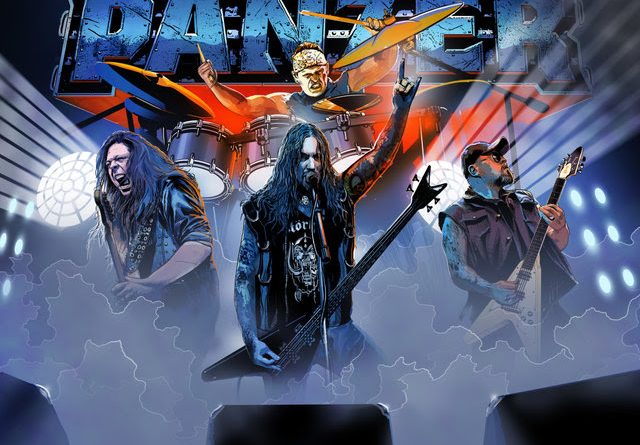 Heavy metal saviours PÄNZER will unleash their sophomore record entitled »Fatal Command« on October 6th, 2017 through Nuclear Blast Records and today, the band is unveiling their first official music video for their new album. The video for the title track ‘Fatal Command’ was shot by Kai Swillus (Buntmetall) at the famous Swiss Club, Z7.

Schmier comments on the video: „We wanted to have a clip that fits with the bands sound, something that catches the energy of PÄNZER. No gimmicks – just a big stage and the look behind the curtain. The Z7 club in Switzerland is something like a home base for many touring bands, we wanted to pay tribute to our fave living-room and the people that work there.“

Speaking about the song ‘Fatal Command’, Schmier explains: „As the album delivers a very pure musical direction, we have tried to maintain and transport that feeling also into the videoclip. Metal does not need much frills – the song ‘Fatal Command’ stands for what PÄNZER is all about: RELENTLESS BEATS, POSSESSIVE HOOK-LINES & MELODIC TWIN GUITAR ATTACKS!”

REPLACIRE are now streaming a guitar play-through video for “Horsestance”, the opening track of Boston’s tech metal shooting stars’ latest album, ‘Do Not Deviate’, which has been released on March 17th. The “Horsestance” clip is showing below:

REPLACIRE guitarist Eric Alper comments: “We chose to do a play-through of ‘Horsestance’, because it’s a really fun song to play. It’s a real burner with some of my favorite riffs on the record. The right hand is really important here, there’s a lot of string skipping, gallops, and aggressive down picking. The main 12-tone melodic riff is also a real finger twister.”