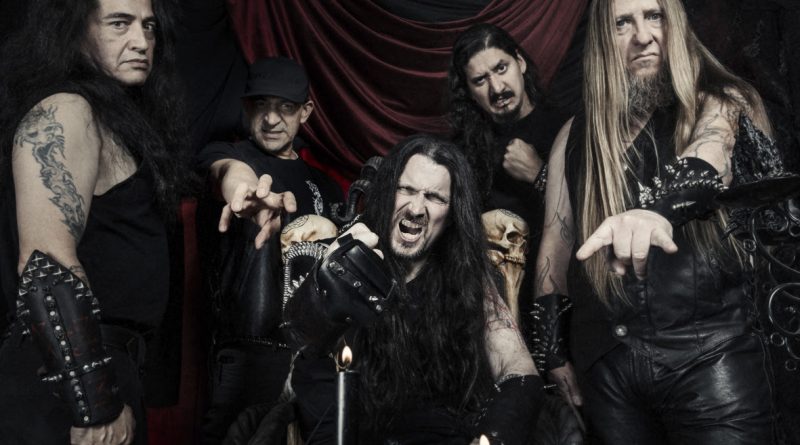 POSSESSED revealed their first album in over 3 decades, »Revelations Of Oblivion«which will be released on May 10th via Nuclear Blast Records. Now the band releases their second single, ‘Shadowcult’ with a live clip from their performance at “Live At Bloodstock Open Air 2017” – watch the video for ‘Shadowcult’, here:

Jeff Becerra comments, “We had such a fantastic time at Bloodstock. The audience was on fire and we could just feel the excitement in the air. While England has always been an exciting place for POSSESSED this concert felt extra special. Very much looking forward to our next trip across the pond.”

From Lisbon – Portugal, the band Titan Shift released their first music video and standalone single “Never Again”. Following the footsteps from their first EP Thrive, released in September 2017, the single “Never Again” comes to us with an improved and more defined sound, reflecting the band’s growth through the last two years. With a very straightforward and powerful sound and lyrical message, it shows the band’s attitude and energy. You can watch the video below:

The band says:
“Since the first days that we started doing music, our main goal is just to make the music that feel and imagine in our minds. Every day we listen to an ocean of new music, adding to years of music history. Unconsciously, inside our head we start building a sound that somehow tries to represent what it would be the perfect mix of all our favorite songs. Never Again is just another step for us to reach the unreachable goal of making that music that fantasize.”

There are several influences combined in this new single, and one of them is clearly the growling Deathcore vocals by Henrique, mixing high pitched screams and low gutturals. Meanwhile, the
instrumental aspect of the song does not relate so much with the typical Deathcore feel, but more with a groovy and paced rhythm. Even the guitar solo delivers a touch of melodic influences that
provides a change in the tonality, near the end of the single. The music video reveals a refreshing imagery, displaying different natural environments, in a somehow unusual way in the metal scene.

“We always wanted to show these spectacular landscapes that Portugal has to offer. Our country is full of beautiful places that deserve attention, and we wanted to show some examples in our first music video. Some of the places that we shot at are very familiar to some of us, since we usually spend our vacations there. The possibility of making a music video there was, in a way, a child’s dream come true. We are very happy with the final result.”

The project, unnamed by then, had its rudimentary beginning in 2012 with the union of guitarist Guilherme Maia with drummer Diogo Cabrita who since then began to play together, almost exclusively covers. Only about two years later would they have the bassist Diogo Sardinha join them, all whilst the pursuit for a vocalist was kept in mind. In January of 2015, suggested by Diogo Sardinha, a second guitarist, Eduardo Pereira, joined the band, with which the work on the project of originals began being taken as a priority. Five instrumental originals were created,
all of which, with the addition of Henrique Maia (brother of Guilherme Maia) in January of 2016, would then have contemplated lyrical content.

Around this time, under the name of Road to Ruin, the band started displaying its work in live performances. By September of that year they recorded what would come to be their debut EP entitled “Thrive”, at Nox Messor Studios with the musical producer Tiago Mesquita. By the end of 2016, with the departure of Diogo Sardinha, the need arose to look for a new bass player. Bassist Sebastião Castro then steps in as the new member of the band, being then defined the line-up kept until today. With the established line-up and ready to officially launch the
project to the public, they changed the band’s name to Titan Shift; Later, in the summer of 2017, the band started working with graphic designer Pedro Alexandre Pereira, creating the logo and artwork for the album “Thrive”. The latter would then be officially launched in September 2017. Since then the band has been playing predominantly in Lisbon, in several venues and events, having shared the stage with national bands such as Tara Perdida, Primal Attack, In Vein, Prayers of Sanity, Toxikull, Stonerust, among others.

Called the “harshest band in America” by The Guardian, NAILS has returned to unleash their relentless fury once again with the release of a new song, ‘I Don’t Want To Know You.’ The digital single out now is accompanied by the ripping B-side ‘Endless Resistance,’ which features guest Max Cavalera (ex-SEPULTURA, SOULFLY, CAVALERA CONSPIRACY). Pre-orders are now available for a limited edition 7″ vinyl that will be released on June 7th and will include an additional remix of ‘Endless Resistance’ byPETBRICK (Wayne Adams, Iggor Cavalera).

»I Don’t Want To Know You« was tracked by NAILS drummer Taylor Young, mixed by Kurt Ballou(CONVERGE) at GodCity Studio, and is the band’s first recording to feature their second guitarist Leon del Muerte (MURDER CONSTRUCT, NAUSEA, EXHUMED). NAILS has also unveiled a music video for the new single that was directed by Nico Poalillo (GHOST, CHELSEA WOLFE). Watch now:

Pre-order »I Don’t Want To Know You« 7″ vinyl here: http://nuclearblast.com/nails-idwtky
Listen to the track in the NB Novelties Playlists:
http://nblast.de/SpotifyNovelties / http://nblast.de/AppleMusicNovelties