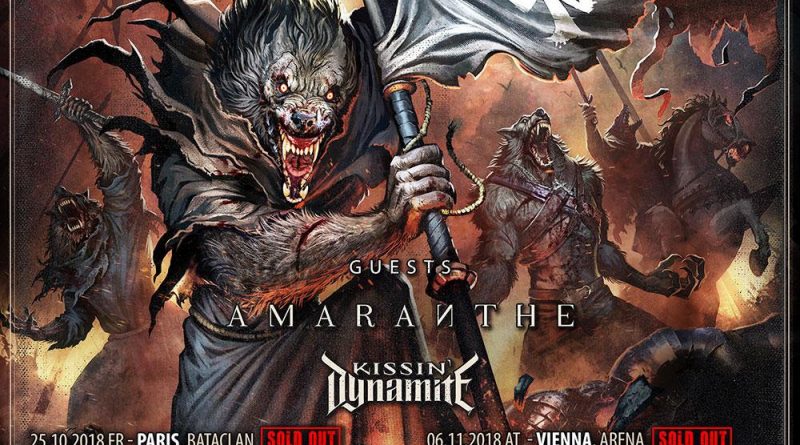 POWERWOLF – Unleash New Music Video For “Killers With The Cross”

Yes, we know you can not get enough of POWERWOLF! No wonder, as they are the most successful band in Germany and probably the hottest act in terms of Metal nowadays! For weeks they have been mixing up the international charts, in Germany they rigorously topped the charts again with their latest album The Sacrament Of Sin! A golden record and sold-out tour cities later, it’s time for a new music video premiere for the song “Killers With The Cross”!

Falk Maria Schlegel states:
“With the song “Killers with the cross”we made a video for one of my absolute favorite songs from our new album “The Sacrament of Sin”. I have to tell you, it has been great and we had a lot of fun on the set and we are super happy with the result!”

Watch the brand new music video for the track “Killers With The Cross” off of the TOP #1 album The Sacrament Of Sin HERE:

POWERWOLF will be heavily touring Europe from October on! Meet the wolves live in the following cities near you! Tickets are selling fast! 3 shows are already sold out – better hurry up!

Get your copy of The Sacrament Of Sin HERE!

METAL ALLEGIANCE began as a celebration of heavy metal, powered by the almost tribal bond shared between the extreme music community’s most revered trailblazers, armed with a list of contributors onstage (and off) that read like a Wikipedia entry on the genre itself. Today marks the release of the band’s sophomore album »Volume II – Power Drunk Majesty« as well as the release of the band’s fourth single, ‘The Accuser’ featuring Trevor Strnad of THE BLACK DAHLIA MURDER. Check out the track video for ‘The Accuser’ here:

Trevor Strnad comments, “I am super honored to have been asked to join METAL ALLEGIANCE as a guest vocalist for the track ‘The Accuser’! The list of greats that have contributed to this union of might and metal over the course of these two albums is truly staggering. To be considered a peer to any of these musicians is a high bench mark for achievement. I spit out my coffee when I saw that they chose the song I contributed to to be the opening track for the album… I was simply shocked!”

Alex Skolnick states, “We’d been searching all over for a vocalist on our opening track ‘The Accuser’ – someone who fit the tune but who could also kick off this album right. One day, while getting ready to go on at Ozzfest/Knotfest, I heard THE BLACK DAHLIA MURDER way off in the distance – Trevor Strnad was using many vocal tones and a few felt perfect for the song. I suggested him to Mark, and as it turned out, we not only found the right guy for our most aggressive track yet, we also got to bring someone from a new generation of metal into the fold; it’s great to have him on board.”

“The vocalist for ‘The Accuser’ had to fit a certain mold and sing these lyrics with honest conviction – he or she had to be willing to dig deep and understand what we were speaking of lyrically,” comments Mark Menghi. “Enter Trevor Strnad, who absolutely nailed it. It seems that in today’s society, it’s very easy to blame a person (or persons) for something in order to save their own ass and cover-up their own lies with heinous accusations. Someone once told me that the greatest fiction novels are the ones with the most detail; unfortunately that’s how society works today and it’s sad for the people that truly need the help.”

Check out the brand new video for ‘Ghosts’:

Asger about the new released song Ghosts: “We are exceptionally delighted to bring you the video for our brand new single “Ghosts”. The video was filmed, directed and edited by David and Dennis Kare Anderson and features the band in a more exposed visual representation than what we’ve tried before. We’ve been keen on letting some kind of fictional frame present a story in earlier videos, so for this track we decided that it was time to clearly show our faces and emphasize the atmosphere revolving around a band performance. In conjunction with the obvious live vibe and more to-the-point character of the song itself, this made a lot of sense to us. The video was shot by the western and eastern coast of Zealand, Denmark, in the heat of a historically warm July.”