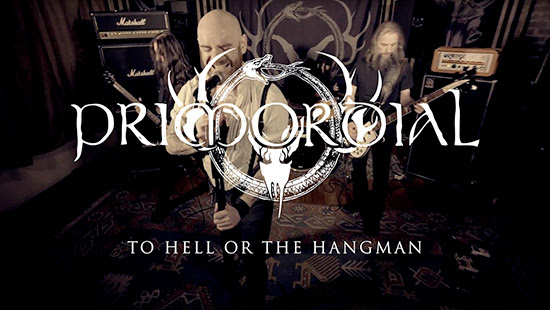 PRIMORDIAL releases video for new single ‘To Hell Or The Hangman’

Irish Pagan Metal Gods PRIMORDIAL will release their new album ‘Exile Amongst The Ruins‘ March 30th through Metal Blade Records. Teaming with producer Ola Ersfjord, who worked on PRIMORDIAL‘s 2016 live album ‘Gods To The Godless‘, the record was tracked at Dublin’s Camelot Studios, located adjacent to their rehearsal room.

PRIMORDIAL have now released the 2nd single out of the album and you can watch the video for ‘To Hell Or The Hangman’, directed by Costin Chioreanu below:

PRIMORDIAL have now released the 2nd single out of the album. Please click youtube.com to watch the video for ‘To Hell Or The Hangman’, directed by Costin Chioreanu.

Comments PRIMORIDAL singer A.A. Nemtheanga: “In 1493 Walter Lynch was hanged by his own father James Lynch, Mayor of Galwayon on the West coast of Ireland for the murder of a young Spanish noblemen who was visiting the family home. He had fallen in love with a young woman by the name of Agnes in the Lynch of household and in a fit of jealous rage one night Walter took the young Spaniard’s life. The story goes that an angry ‘lynch mob’ took to the streets and barred the way to the usual execution spot so James took his son Walter and hung him with his bare hands from the open window into the street…..he was lynched from the hanging sill. ‘To Hell or the Hangman’ is this story through Walters eyes, a tale of unrequited love with a murderous end. Enough drama for you? A curious and strange song for single number two from the new album, dark romanticism! so get on the dancefloor…”

BOLU2 DEATH promised to all their fans that when they reached 3000 euros in their verkami campaign, they would release their second single of the next album “Spiral”; what is promised is debt, they have achieved it and here you have “We bleed, we fight” the 2nd single. There is only one more push to achieve the goal of the campaign, so we hope your help through the following link: http://vkm.is/bolu2spiral

And now… enjoy “We Bleed, We Fight”

Vandenberg’s MoonKings – Check out the new video for Reputation

Classic Rock icon Adrian Vandenberg and his Vandenberg’s MoonKings return with their brand new single ‘Reputation’ taken from their new album ‘MK II’ which was released in November 2017 on Mascot Records..

The riff-rollcoaster of ‘Reputation’ is classic rock at its most swaggering. Jan Hovings vocals confess “been there, done that, in and out of trouble” over a relentlessly infectious groove and at just over 3 minutes, the song perfectly captures Vandenberg’s fret-board wizzardry which darts through a fist pumping anthem.

Talking about the song Adrian says, “one of the MoonKings live show favorites! Fast paced, no hold barred, firing on all six, in your face, unpolished. Rock’n Roll MoonKings style. A ‘Reputation’? You bet, we don’t hold back on this one!”

Four years after Adrian Vandenberg made a spectacular comeback with Vandenberg’s Moonkings the band return with a sophomore album, simply titled ‘MK II’. The album has all the qualities of the debut: once again the four-piece band manage to create a perfect blend of vintage seventies and heavy rock. Adrian Vandenberg shines as a bonafide guitar virtuoso, while the rest of the band deliver a powerhouse performance.

“The last few years have been very important indeed”, confirms Adrian Vandenberg, who shot to world fame as the guitarist and songwriter of Vandenberg and Whitesnake. “We just got to know each other when we recorded out debut album. I think we all exceeded each other’s expectations. But you really get to know each other while on the road. It was then that I really became impressed by the abundance of energy that this band has. We tried to capture this on our new album. At the same time, we all grew individually. I am really amazed by the way Jan Hoving has grown even more in his role as a singer and as a front man. I’ve played with the best bass players and drummers in my extensive career, but with all respect I dare to say that Sem Christoffel and drummer Mart Nijen Es form the best rhythm section I ever had the pleasure of working with.”