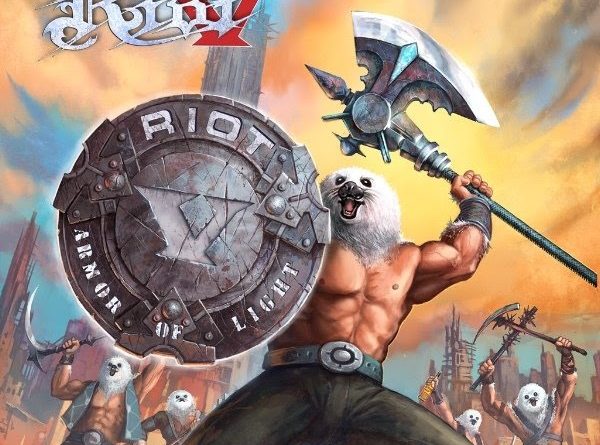 Cult New York heavy metal band and godfathers of power metal, RIOT V, will release their 16th album entitled, »Armor Of Light«, on April 27th via Nuclear Blast. Now here’s the release of the first single off the new album, entitled ‘Victory‘, just in time for the launch of the album pre-order! Listen and watch, here:

Mastermind Donnie van Stavern (bass) states:
“‘Victory’ is the first song on the new album “Armor of Light” and the first song I wrote for it! I’m taking it back to my writing roots of “Thundersteel”/”Privilege of Power” style, a fast no holds barred face melting assault on your ears! Although it is about a victorious battle of Thunder Bay it also means a victory of sorts for us and the fans for keeping the torch burning! Rise up your voices strong and scream along cry out…Victory!”

The track listing of »Armor Of Light«:

The new songs promises to please fans of the »Thundersteel«-era of RIOT, as main song writer and long time Mark Reale music collaborator Don Van Stavern undertakes a lot of the writing as he did on »Thundersteel,« »The Privilege Of Power« and the latest offering »Unleash The Fire«.

“A whirlwind ride through dark clouds and muddy waters, hi-energy sludge that rolls and heavy riffage that rocks,” is how drummer Mario Rubalcaba described ‘Black Heaven’. “Psychedelic sprinkles all over the place make me wanna turn this sucker up loud as hell only to howl at the heavens”

“The main riff for ’Black Heaven‘ came about during a soundcheck in Australia in 2015,” adds bass player Mike Eginton. “I think we sort of played that riff a little bit several times on that tour while we were setting up. Other parts came in over the following years, but it wasn‘t ever worked on very seriously until we started working on »Black Heaven«. Then it came together pretty quickly when we started jamming it out.”

Pre-orders, with digital pre-orders including instant downloads of ‘Gifted By The Wind’ and ‘Black Heaven’, are available now via Nuclear Blast: http://nblast.de/EarthlessBlackHeaven

SETTLE YOUR SCORES are back with a dynamic and utterly fun new album that will be released on April 13th via SharpTone Records. Until then, check out this brand new song ‘Keep Your Chin Up and Your Expectations Down’ and music video below to get a good feel of what’s to come with their new, full-length offering »Better Luck Tomorrow«

SETTLE YOUR SCORES states: “This new track, ‘Keep Your Chin Up And Your Expectations Down,’ is about the wondrous joys of dating in the modern day and age, a culture built on instant gratification and short attention spans, boiled down to a shallow swiping system. This song was heavily inspired by an episode of Master of None, where the main character begins using a dating app and goes on a series of lackluster dates, filled with disappointment and awkward situations. It reminded me a lot of my own experiences and I knew right away that I wanted to turn that into a song. When making the video, we wanted to convey those experiences in a compelling way in under three and a half minutes, so a speed dating scenario seemed like the obvious choice.  Musically, the song is very reminiscent of early 2000s pop-punk. The high energy and hooky chorus made it a strong candidate for first single. The new album is pretty diverse compared to our previous material so we are very excited to see how people react.”

Get the digital single here: https://SettleYourScores.lnk.to/KYCUAYED