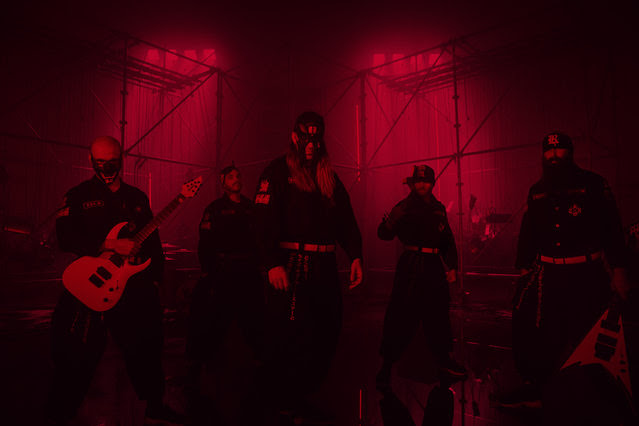 Commented the band: “We chose this track as the first single of our new album because it’s a perfect synthesis, from the way it sounds to the lyrics, everything is summed up in this song. Attaque contre-attaque, here comes the boom.”

Check out the official music video below:

The song comes off the band’s impatiently awaited, as of yet untitled second album which is scheduled to drop this year. The album was recorded with GOJIRA‘s Joe Duplantier in his Brooklyn, NY-based Silver Cord Studios.

Over the course of the past 4 years, the internationally acclaimed band has become a household name for crossing 90s metal, rap, hardcore and japanese culture as well as brutal and intense live shows. After the release of their globally praised debut album, »Welcame« (2014), the band embarked on countless tours, leaving dropped jaws everywhere. With their new, crushing album in store, the Northstar will rise to unknown heights.

Pittsburgh political punk band Anti-Flag have just announced a UK/Euro tour this fall, with Silverstein, Cancer Bats, and Worriers. Tickets for the tour go on sale Friday, July 20th at 10AM BST. The band has also announced two ANTIfest indoor festival shows. ANTIfest is the band’s own festival they have hosted in various locations in Europe, UK, and the U.S. since 2012. Lineups and other information for the fest can be found below.

In conjunction with their tour announcement, Anti-Flag have released a music video for “Trouble Follows Me.”

The video was directed Alexey Makhov and filmed in Bratislava, the capital of Slovakia, during the band’s current European summer tour. The song comes off of their 2017 album American Fall, available now via Spinefarm Records. A quote from Anti-Flag on the tour can be found below.

“Anti-Flag have always seen punk rock as a vehicle for change; community leads to recognizing commonality, which leads to a recognization of our collective power, which leads to us knowing we have the power to create the future we want to see.

This tour, this line-up, eclectic in sonics but all bands believe in sharing empathy over apathy, optimism over cynicism. The goal is to bring people from all walks of life through the door. Introducing them to new people, new friendships, new ideas.

Silverstein: a band we have done countless Warped Tours with… have been comrades in arms for years (hell, Chris #2 and Paul Marc play ice hockey together). They’re a powerful band, we’ve shared stages all over the world, but this will be our first club tour together.

Cancer Bats: some of our oldest friends… we’ve toured together in Canada, the US, played shows in the UK, but finally get to trek across Europe together. Their newest album is a perfect representation of their ability to connect with people in the hardcore, metal and punk rock world. They are a band made up from kids forged in those scenes.

Worriers: some of our newest friends! This band being a part of the tour is an incredible honor. The members of Worriers are some of the most committed people in punk rock, their work and time should be applauded. Survival Pop is one of our favorite records in the last few years and we can not wait to hear these songs every night.

As with any Anti-Flag tour, records, bands, and t-shirts are not the predications of our work. Amnesty International, Sea Shepherd, Kein Bock Auf Nazis, (and hopefully many other local organizations) will be involved. Disseminating ideas on how to fight fascism, fight for human rights and fight for the life of our planet at every show. At a time when we see the right and fascism as a whole on the rise, racism being emboldened, and hatred commonplace in public discourse… these shows will hopefully provide solace, a place for us all to come together and recognize our power, recharge our strength and continue to fight bigotry with every breath we take.

‘These are the days that test your heart and soul. Strap yourself in for the American Fall.'”

Australian melodic death-thrashers Naberus have revealed a new music video for the song ‘My Favorite Memory’. The video was directed by Cat Argiriou and edited by Consta Theoharpoulos. This is the third music video from their sophomore full-length album entitled Hollow, which was released via Eclipse Records on June 29, 2018. The video draws upon singer James Ash’s personal experience of his father’s battle with dementia. Watch the video below:

“We filmed the video over two days with most of the video being shot on a lovely sunny Melbourne day,” says lead singer James Ash. “When we finally filmed the beach scenes, this ended up happening on a cold overcast day. Tianna had to wade into the ocean and fall under the water. It was so cold that day, she was screaming and cursing us – you would never know though as we only saw her back.”

The album was produced by James Ash at Kremation Studios, mixed by Henrik Udd (Bring Me the Horizon, Architects, A Breach of Silence) and mastered by Ermin Hamidovic (Periphery, Devin Townsend Project). The album’s title track ‘Hollow’ is currently in Spotify’s New Metal Tracks and New Core playlists, and metal radio has been spinning the single heavily since its release!