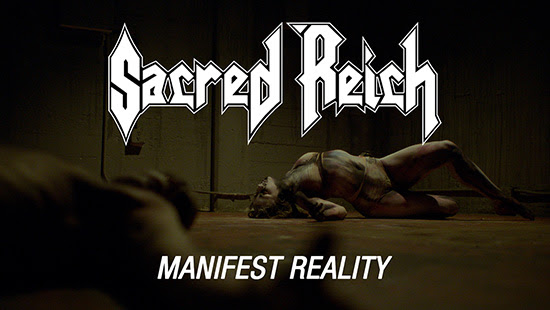 Speaking on the track and its accompanying video, frontman and bassist Phil Rind says:“‘Manifest Reality’ is about overcoming mental obstacles and becoming the change we want to see in the world. No one is coming to save us. It’s up to us. The song is very positive and encouraging.
The video directed by the supremely talented Mark Pellington, shot by the incredible Ann Evelyn Lawford and talented corps of dancers choreographed by Nina McNeely presents a dichotomy. It shows the struggle we face day to day, moment to moment in overcoming the habits we have created that hold us back. The conflict between our best and worst instincts. Releasing grief and overcoming isolation. The yearning for something better.”

To celebrate the release of Awakening, Sacred Reich will be hosting an album launch party on release day (Friday, August 23rd) at True Tattoo in Hollywood, CA. The private album launch party will take place from 9pm – 11pm. The band will be in attendance and the event will be hosted by LA legend Metal DJ Will. The first 50 fans to sign up have a chance to attend; submit your entry now here: smarturl.it/awakening-party

Pre-order bundles are available now from metalblade.com/sacredreich. See below for available formats: 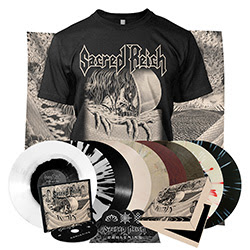 Blackened Death Metallers BLOOD OF THE WOLF have released the official video for “The Sword is My Light and My Salvation.” The song is taken from the band’s sophomore album II: Campaign of Exterminationand is also included on Horror Pain Gore Death Productions collection Album I + II, which includes both the sophomore album and debut I: The Law Of Retaliation. You can watch the video below:

Austin, TX-based melodic death metallers VEX have released new single “Timeworn” along with accompanying music video (produced by Necroblanca Photography & Design). The band will be hitting the road with Century Media’s Oceans of Slumber and Black Lion Records’ artist Hinayana in support of the single this month.
Drummer Eoghan McCloskey remarked, “We chose ‘Timeworn’ as the first single because it’s emblematic of the direction we are taking on our new record. Proggy and atmospheric like our last album, but shorter songs with more streamlined, less indulgent arrangements.”
Purchase/Stream “Timeworn”
vextx.bandcamp.com/track/timeworn
Stream “Timeworn” on Spotify
tinyurl.com/y2y52xrk
VEX on the Road:
7/18 – Kiva Lounge in San Marcos, TX with Hinayana & We Deal in Lead
7/19 – Come and Take it Live in Austin, TX with Oceans of Slumber & Hinayana
7/20 – White Oak Music Hall in Houston, TX with Oceans of Slumber & Hinayana
7/21 – Boozer’s in Corpus Christi, TX with Fall & Hinayana
8/17 – Brewtal Bazaar 20 at Independence Brewing Company in Austin, TX
9/7 – Congregation of the Dead Festival at Zombie’s in Amarillo, TX