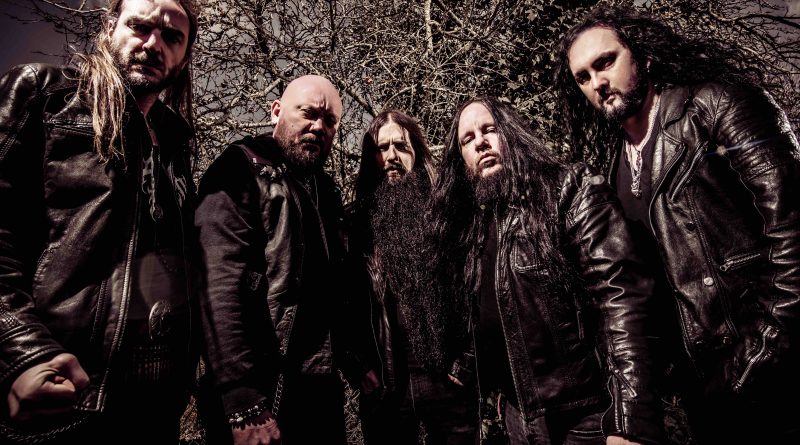 “Repulsion For Humanity”, the second album from the unique superband Sinsaenum will be released on the next 10th of August by earMUSIC. As the title clearly indicates, it’s not for the fainted heart. Definitely not something you can hear on the radio or that our mother would sing during dinner. On the contrary:

“It’s radical, violent and angrier”, says leader and founder member Frédéric Leclercq. “The new album is a continuation of “Ashes”. Genre and soundwise, we added more influences to the mix. This álbum is 100% Sinsaenum – it’s not intended for the masses, not following any trends and not made to fit on radio criteria. From the design (made by Travis Smith), to the lyrics and the music itself, there’s not a drop of comercial compromise.”

“Repulsion For Humanity” was recorded during the long and dark 2018’s Winter, when the band shared a house. With the help of Francis Caste on the mix, Sinsaeum tuned up their own sound identity, drifting farther away from the traditional death metal or even the modern metal sound.

Joey Jordison comments: “In a way, “Repulsion…” seems as it is our first album, because I had the opportunity to record my drum tracks in France with the band this time. They fed me ideas and we builted together the sound bases as a band, so that the rest could be put upon that foundations. This album is lethal and the music’s songwriting evolved a lot.”

Now, Sinsaenum reveal their brand new song “Final Resolve”. The song, a brutal punch in the face, is the first to be released from the band’s forthcoming “Repulsion For Humanity” album and is accompanied by an official music video that you can watch below:

With its earworm riff, its powerful larger-than-life chorus, its technical and melodic solo section, “Final Resolve” shows yet another side of Sinsaenum. The presence of Les Tambours du Bronx, the renowned French industrial percussion band, certainly adds to the song’s martial groove, making it an instant metal anthem for crowds to bang their heads to.

Founding member and mastermind Frédéric Leclercq: “It is still death metal, it’s undeniable. But we found it interesting to mix it with other elements that we all like. This is only one aspect of the album and what Sinsaenum is about – ‘Final Resolve’ is just an obvious first single due to its catchiness. Because yes, it is possible to play death metal and be catchy [laughs].”

Stoner-blues-Rock band (with a heavy dose of fuzz) influenced by the biggest names of the genre, Mystic Sons just offered a first glance from their upcoming album with an official music video of the single “Mephistopheles” available right now below and with the courtesy of PureGrainAudio Media from Canada.
The song will feature on the debut and self-titled album coming out for CD, LP & Digital on June 1st through their own Bandcamp webstore

THE LION’S DAUGHTER are now streaming the second crushing track taken from their new album, ‘Future Cult’, which has been slated for worldwide release on July 20th, 2018. The song “Call the Midnight Animal” is streaming below:

THE LION’S DAUGHTER comment: “The midnight animal is that creature we are all capable of assuming the role of in our uglier moments. This appalling character that can sometimes creep to the surface, often through drugs, alcohol, or simply anger and hatred. You wake up and you’re no longer sure who you are or what you’ve done. You’ve hurt people, you’ve hurt yourself, and you’ve enjoyed doing it. The intro to the track is the slow build where the shift in personality takes place… before moving to the explosive violence where the damage and destruction occur. The song’s ending is sobering regret and a state of physical and mental collapse.”